Making the choice to serve and protect the nation is a selfless ode that every IPS officer undertakes, at the cost of making the ultimate sacrifice in the line of duty. Based on the true events of an Indian braveheart who vowed to bring law and order back to the crime capital of India, MX Original Series Bhaukaal returns for a highly anticipated second season. Inspired by the life of IPS officer Navniet Sekera, Bhaukaal 2 sees Mohit Raina reprising his role as the heroic S.S.P Naveen Sikhera, who puts service before self and brings alive the story of Muzaffarnagar, UP and its saga of lawlessness in 2003. 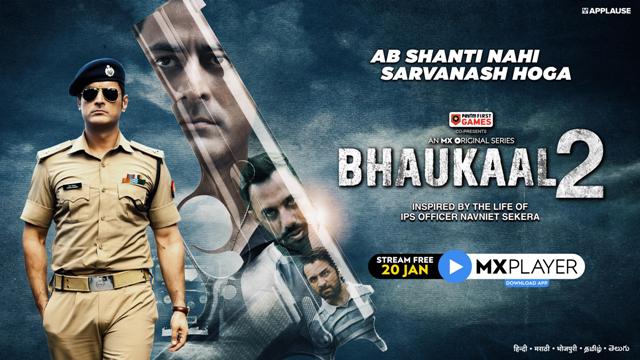 Directed by Jatin Wagle, this 10-episodic-web-series tracks Naveen Sikhera’s journey as an efficient cop ready to bring change and peace in this chaotic hinterland town. After dismantling Shaukeen’s gang in season 1, this second season of Bhaukaal sheds light on Naveen and his men facing the unchecked havoc of the Dedha brothers who are hungry for power in Muzaffarnagar. The series also stars Bidita Bag, Siddhanth Kapoor, Pradeep Nagar, Gulki Joshi, Ajay Chaudhary, Rashmi Rajput and Late Major Bikramjeet Kanwarpal in pivotal roles.

Speaking about reprising his roles as Naveen Sikhera – Mohit Raina said, “Since my role is inspired by a real-life Singham, I wanted to go the extra mile to do justice with my character. We never realise the sacrifices that these men in khaki make for us. Whether it’s working planned shifts or being called into duty for emergency responses and all-hands on deck situations, there are so many times when law enforcement officers are called away from their families and are forced to miss holidays, birthdays, kids’ games, school events and more. This role for me was a small way of saying thank you to these Bravehearts who put everything else on hold for their duty to the nation.”

Elaborating on the anticipation of the fans of this franchise, he said “This show is not just about solving crimes or eradicating goons/ gangs from a particular city. It’s about restoring people’s faith in the judiciary and that justice always prevails. And after our Bhaukaal season 1, fans want more from us. So, we are here with Bhaukaal 2 which has more thrill, suspense, cliffhangers and excitement.”

Produced by Applause Entertainment in association with Baweja Studios Production, MX Original Series Bhaukaal 2 is written by Akash Mohimen, Jay Sheela Bansal and Jatin Wagle and is all set to release on 20th January on MX Player.