There are two highly-awaited films of the year to be released in the month of March, one from the Marvel Cinematic Universe titled Captain Marvel & the second is Hindi epic war drama Kesari. Apart from these two, there are a decent number of other anticipated releases as well. 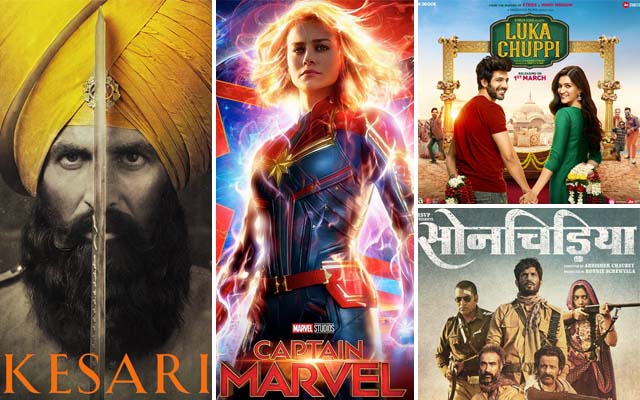 Luka Chuppi: Directed by Laxman Utekar, this interesting romantic comedy is already out in theatres on 1 March 2019. Starring Kartik Aaryan & Kriti Sanon in lead roles, the film is getting a good response from the audience.

Sonchiriya: Directed by Abhishek Chaubey, an offbeat crime drama has already hit the theatres on 1 March 2019. Featuring an ensemble cast that includes Sushant Singh Rajput, Bhumi Pednekar, Manoj Bajpayee & more is being liked by everyone.

Captain Marvel: One of the most-awaited films of the year globally, Marvel Studios’ presentation is all set to release in India on 8 March 2019. Directed by Anna Boden & Ryan Fleck, it stars Brie Larson in the titular role.

Badla: Directed by the very promising Sujoy Ghosh, the Hindi thriller drama brings megastar Amitabh Bachchan & Taapsee Pannu together once again after the critically acclaimed Pink. An official adaptation of the Spanish film The Invisible Guest, it is set to release on 8 March 2019.

Milan Talkies: Directed by Tigmanshu Dhulia, the desi romantic drama stars Ali Fazal & debutante Shraddha Srinath in lead roles. The film has received a good response for the trailer and set to hit theatres on 15 March 2019.

Photograph: Starring the supremely talented Nawazuddin Siddiqui opposite Sanya Malhotra for the first time, the coming-of-age romantic drama is scheduled to release on 15 March 2019. Directed by Ritesh Batra, the film had received appreciation in 69th Berlin International Film Festival.

Mere Pyare Prime Minister: Directed by Rakeysh Omprakash Mehra, the Hindi social-drama stars Anjali Patil. Based on the story of a single mother & her innocent kid, the film is set to release on 15 March 2019.

Kesari: Starring superstar Akshay Kumar & Parineeti Chopra in lead roles, the epic war drama is one of the highly-awaited films of the year in Bollywood. Directed by Anurag Singh, it is all set to release this Holi on 21 March 2019.