Very early in her career, Janhvi Kapoor has got a chance to star in a female-oriented film. For her next, Dhadak actress has stepped into the shoes of Indian Air Force Pilot Gunjan Saxena, the first Indian female airforce pilot in combat. The Hindi biographical drama titled Gunjan Saxena: The Kargil Girl is directed by Sharan Sharma and also stars Pankaj Tripathi, Angad Bedi, Manav Vij & Vineet Kumar Singh. 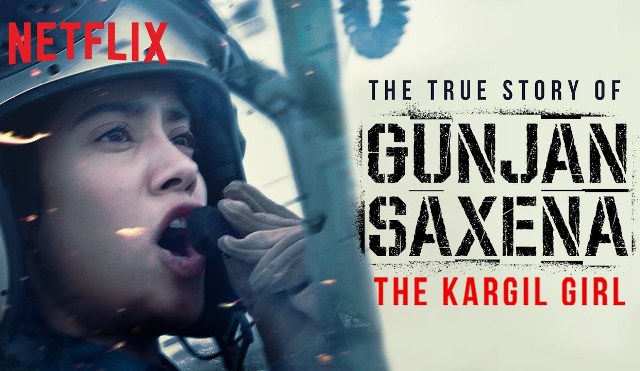 On Tuesday, Janhvi Kapoor shared a teaser video of the film that features real-life Gunjan Saxena and gives a brief about her inspirational story narrated by Janhvi herself. The actress has also confirmed, that Gunjan Saxena: The Kargil Girl is going to skip the theatrical run and will release directly on Netflix.

She wrote on Instagram, “This isn’t just a film for me- it’s a journey that’s taught me to believe in myself. A journey I can’t wait to share with you all. About a girl who set out to do something simple, follow her dreams. #GunjanSaxena – #TheKargilGirl coming soon on Netflix.”

Produced by Zee Studios & Dharma Productions, Gunjan Saxena: The Kargil Girl is the third Bollywood film after Amitabh Bachchan – Ayushmann Khurrana’s Gulabo Sitabo and Vidya Bala’s Shakuntala Devi, which was initially scheduled to release in theatres but has opted to premiere directly on an OTT platform due to the ongoing lockdown.

Exhibitors and theatre owners are apparently not in favour of direct OTT releases. But it’s been almost 3 months, all theatres across the country are closed. Also, there is still no clue when they will be re-opened. So producers have no other option but to go digital to avoid further losses.