Makers of the upcoming dark thriller, ‘Happy Birthday’, teased fans by revealing its poster on Monday. ‘Happy Birthday’ has been one of the most highly anticipated short film of the year, starring veteran actor Anupam Kher, Aahana Kumra and directed by the very talented Prasad Kadam. 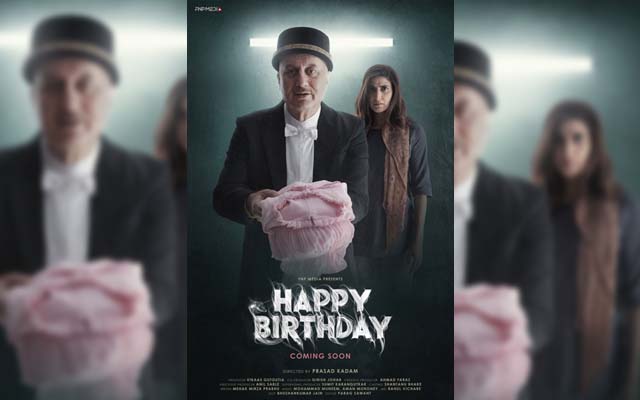 The actors are very excited to share their first poster of ‘Happy Birthday’ to the audience on various social media platforms. Sharing his journey throughout the making of this short film to sharing his joy of making it to the Paris Play Film Festival, Anupam Kher says “I enjoy working with young talent as they are enthusiastic and eager. They keep me charged as I take it as a challenge to keep reinventing myself. The short film is especially exciting and it gives me an opportunity to do something different. I’m glad that Happy Birthday is garnering international recognition. Congratulations to the entire team.”

“I instantly said a Yes to the film the minute, I read the script I think it was a very very powerful script. It was very moving and you know it’s a Dark thriller despite that the performances of the actors will hold. Because the script is written so well. I am so excited that it has been selected for the Paris Play Film Festival and I really look forward to the finals because I really think this film has great potential. Director Prasad (Kadam) has done a fantastic job along with the entire team and the credit goes to the crew and Anupam sir, of course so happy to be sharing screen space with him once again, I couldn’t be happier than this “said Aahana Kumra.

The poster is very intriguing and captivating and has done a perfect job of catching the viewer’s wavering attention. The film is the hard work of the entire team starting from spot boy to the director who deserves a huge round of applause. FNP Media is extremely delighted to collaborate with such brilliant casts and are keen to see the audience support/response. FNP Media also has many upcoming plans to experiment with its offerings.

In spite of the lockdown and the turns that people had to go through, the entire team of ‘Happy Birthday’ started shooting earlier this year and have successfully completed hurdles on the way to make it to the finalist of the Paris Play Film Festival also selected for New York City International Film Festival.