The biggest Indian film ever, hugely-awaited 3D sci-fi 2.0 is all set to hit the silver screens coming Thursday on 29 November 2018 across 7000+ screens nationwide in Hindi, Tamil & dubbed Telugu languages. It marks the widest ever Indian release across the country & also the overseas with 2500 screens including 15 languages. 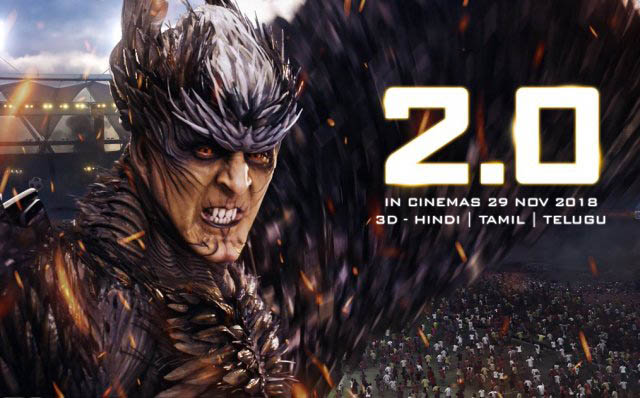 Starring the two kings box office, superstar Rajinikanth & Akshay Kumar in lead roles, 2.0 has a whopping budget of approx. 600 crores, which make it the biggest & the greatly-hyped Indian film ever. For the first time, any Indian film has been shot with 3D cameras & has such superlative Hollywood-standard visuals.

Because of exceptional pre-release buzz, makers & distributors of this magnum opus have decided to open its advance booking entirely earlier than usual across the country. Although, the pre-booking for all three versions has already been started in selected cities of south India.

As per reports, 2.0 has registered a record-breaking pre-release collection of 120 crores at the ticket window from Tamil Nadu only. With this, it has become the first Tamil movie to cross 100-crore mark before the release. The movie is expected to be declared nationwide houseful for the entire weekend in advance.

In the rest of India, pre-booking for S.Shankar’s directorial is likely to open from Sunday midnight. Thala Rajinikanth & Akshay Kumar both have a solid stardom globally and their fans have also requested to the makers to open its advance booking earlier.