Around a month back, we heard that Hotstar has acquired the rights of Akshay Kumar’s much-awaited horror-comedy Laxmmi Bomb for the direct-OTT-release at the whopping amount of 125 crores. At that time, this was hard to believe because there was no official confirmation. But on Monday, 29 June 2020, Disney Plus Hotstar itself has made it confirmed. 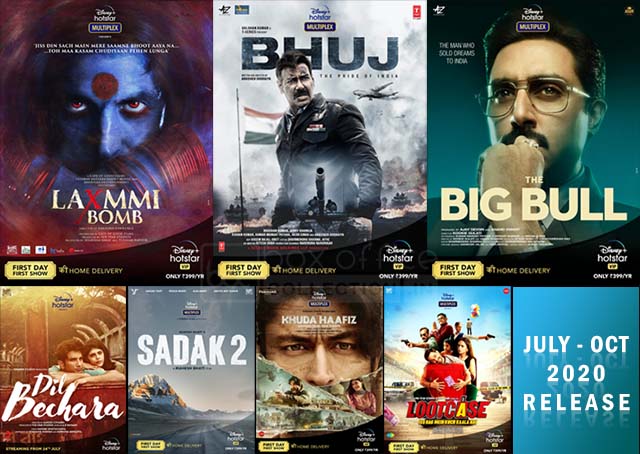 Yes, superstar Akshay Kumar & Kiara Advani starrer Laxmmi Bomb is all set to skip the theatrical run and will be premiered on Disney Plus Hotstar VIP this year. Not just this, but superstar Ajay Devgn’s war action film Bhuj- The Pride of India which also stars Sanjay Dutt, Rana Daggubati, Sonakshi Sinha, Parineeti Chopra & Ammy Virk will also be released directly on the same OTT platform.

Kunal Kemmu, Gajraj Rao, Ranvir Shorey, Vijay Raaz & Rasika Dugal starrer comedy-drama Lootcase which is getting postponed from last year, is also in the list of Hindi films to go digital. Few days, Disney+ Hotstar made an announcement about the release of late Sushant Singh Rajput‘s final film Dil Bechara. This one will be available for all including subscribers & non-subscribers for free.

Disney Plus Hotstar that has taken a giant leap among all OTT platforms by announcing 7 new direct-OTT-releases, will release all the films between July & October this year. Sushant & Sanjana Sanghi’s Dil Bechara will be the first one to be released by the platform on 24 July 2020.