The 3rd edition of the Lux Golden Rose Awards (LGRA), which was recently held at NSCI Dome in Mumbai, congregated B-town’s biggest and brightest stars across eras to extend their support for UN’s HeForShe campaign and to stand in solidarity for gender equality in a one of its kind extravaganza celebrating female cinematic legends of the silver screen. 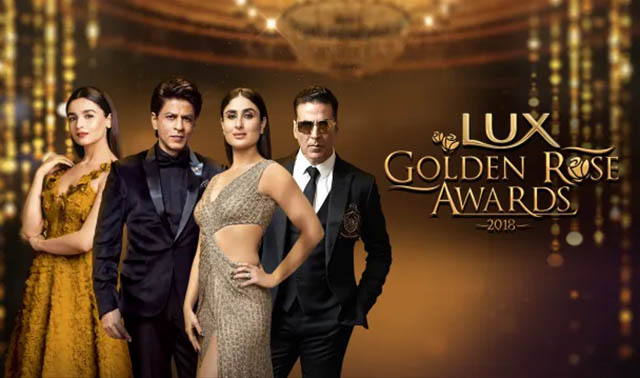 The performers entertained audiences with their mesmerizing and colourful jigs, and the novel combination of hosts had all in splits throughout the evening. Shahrukh Khan’s evergreen wit combined with Varun Dhawan and Akshay Kumar’s hilarious dramatics was very well received and appreciated.

B Town regulars and other spectators for the evening were in for a memorable surprise as they watched leading B-town male celebrities pay tribute to some of the most loved Divas of Bollywood for their immense contribution in their professional and personal lives.

Kareena Kapoor Khan, as usual, left audiences spell-bound being her vivacious self as she performed on superhit tracks of her male co-stars. Charming superstar, Varun Dhawan’s performance was a tribute, celebrating the gorgeous women he has had the chance to share screen space with.

The evening also housed a sizzling performance from this year’s star debutants, the lovely ‘Dhadak’ pair Janhvi Kapoor and Ishaan who performed on hits like Dhadak, Jugni, Kar Har Maidan Fateh and the chartbusting Zingaat but the star performance of the night was by none other than the Dhak-Dhak girl of Bollywood Madhuri Dixit, who performed to Hema Malini’s Dreamgirl and to Helen’s Yeh Mera Dil. She is also seen dancing to late actress Sridevi’s Hawa Hawai and her own song, Tamma Tamma Loge.

The night ended on a high note with the ruling men of Bollywood – The Badshah and Khiladi along with the super charming Varun Dhawan who came together to celebrate these iconic women and the women of the country – the Lux HeForShe finale.