After being banned for 8 long months by the censor board, audiences pan India will get to see one of the most awaited films of 2019, No Fathers in Kashmir. The film made headlines earlier this week when it finally got justice and the UA certificate that it had been fighting for all these months. 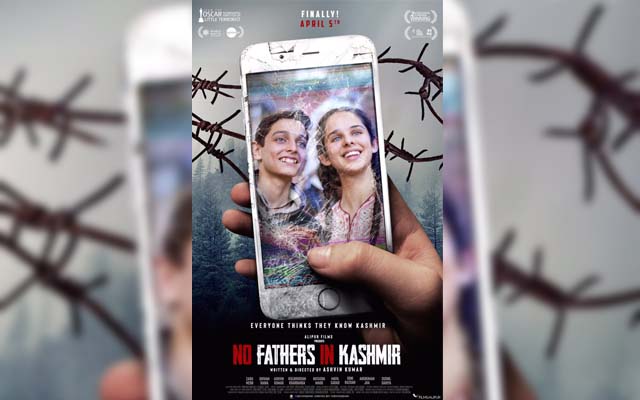 Ashvin Kumar the director who has helmed the project has previously been nominated for an Oscars for his short film, Little Terrorist and has won two National Awards for his eye-opening films on Kashmir — Inshallah Football and Inshallah Kashmir. No Fathers in Kashmir is the 3rd in his ‘Kashmir trilogy’. Themes of hope, peace and humanity run through all his films so far with No Fathers being within the same emotions.

Besides being its writer & director, Ashvin also stars as one of the lead characters of the film and is joined by stars Soni Razdan, Kulbhushan Kharbanda, Anshuman Jha and Maya Sarao and it is all set to release on the 05th of April 2019 across cinemas in India.

The makers now released the first look poster of the film which features the shattered screen of a phone behind which two charismatic blue-eyed, grinning 16-year-olds peer out. The story traces a teenage British Kashmiri, Noor, who re-traces her roots in search of her father.

There she meets Majid, a local boy smitten by her, takes her to a forbidden area near the Indo-Pak border fraught with danger. They stumble upon a dark secret and things going awry when they’re arrested. Noor is soon released with Majid still captive. Having put him into peril how far will Noor go to have Majid released. And can love ever be the same again for these two?

With a bold tagline “Everybody thinks they know Kashmir” the makers are clearly hinting at what is expected from the film and its storyline.