The year belongs to Aditya Roy Kapur! After making headlines with his big-scale OTT debut – The Night Manager remake, the actor shares another look from his mass action franchise Om: The Battle Within! Announcing the summer release date of his next theatrical, the actor gave a glimpse of his new and ripped Avatar in the film. 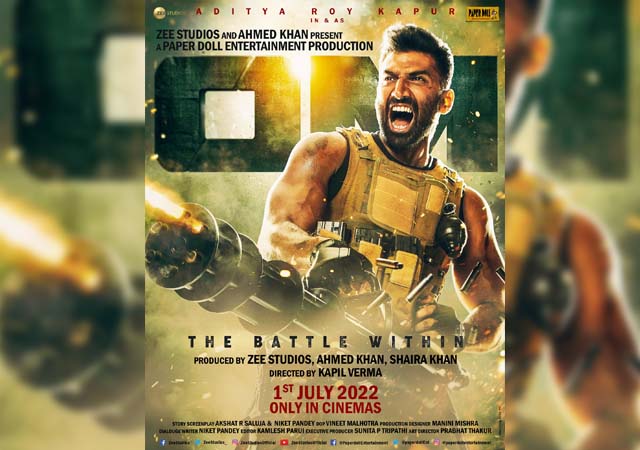 A source revealed, “Aditya Roy Kapur will feature in a full-blown action entertainer with Om: The Battle Within. The actor has performed high-octane stunt sequences in the film, a completely new character from his previous films. Owing to the same, the anticipation around the release is already high. Fans are already hailing it as one of the biggest releases of the year.”

Aditya Roy Kapur’s most-awaited action drama Om: The Battle Within will hit the screens on 1st July 2022. The desirable action hero flaunts his ripped muscles and chiselled body in the poster, making the audience go wild to witness his gripping screen performance in the film.

Bankrolled by Zee Studios, Ahmed Khan, and Shaira Khan, Om: The Battle Within is directed by Kapil Verma and also stars Sanjana Sanghi as a leading lady.

Meanwhile, Aditya Roy Kapur had been filming across India and Sri Lanka for The Night Manager remake and his action-thriller ‘Thadam’. Setting the trend, the actor is one of the first from the younger generation of stars to venture into OTT.