Actress turned host Neha Dhupia kickstarted the new work-from-home edition of her popular audio show No Filter Neha with Saif Ali Khan as a guest. The actor has revealed many things about his life in the first episode of season 5- 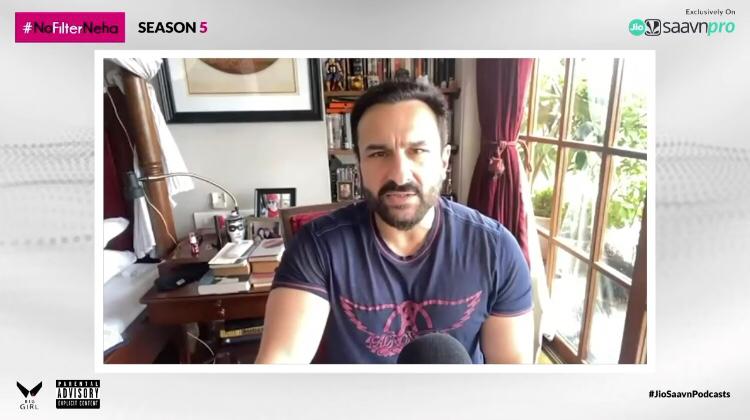 Is Saif a homebody?
It’s become that. The excitement of having a young new entrant in our lives, I just wanted to try and get home before he goes to sleep. But I have become, at least in Bombay, a complete homebody

Said Ali Khan tells us how he keeps up with the industry
Well, it’s been a few years, it will be almost 30 and I think that we are lucky. When I was a kid and shooting for Umesh Mehra, I remember he said, “Oh well you know, you’ll probably be done in about 10-15 years, meaning in your mid-thirties or when you are 40, it’s time to kind of retire for a Hindi film actor.” I think it’s our generation that’s kind of changed that. Of course, there have been people like Mr Bachchan and Anil Kapoor and all who have pushed the age limit as it were.

There’s a lot of extracurricular requirements sometimes, you know, go here and be seen there which is good and lucky for young people who have to do it, I mean good luck. When you are 30 and you are drinking with the crew or with the guys, you are imitating somewhere the heroes you have seen that are senior to you like Sanjay Dutt, Jackie Shroff and you are doing the talk and giving the gyaan. It is great, you have got the lingo and the haircut, and the tight t-shirt and after a point though, you are like…this is going to give me a hangover, I need to wake up early.

So, I guess its age and priorities where you are like there is nothing that is going to be said after a party at 1 am, there is nothing going to be said that is really going to change your life or is even important, beyond a point. It is a question of how much energy you have. If you have excess energy then you need to burn it off and that’s what weekend is about, or the off day, but if you don’t have that excess energy than you are burning the candle at both ends which is not worth it

Saif’s idea of the perfect gift
Something from mum’s cupboard, an old tablecloth, or maybe one of her paintings, I don’t know. There are many things, maybe a little model of a ship, I got some little quirky tastes which she knows like a nice first edition, maybe a book bound by a local Bombay book dealer but in a slightly nicer leather with a little engraving on it, a paperback I like just polished up a little bit to last. There are many things like that.

Imtiaz Ali offered Saif Rockstar?
I was offered, Imtiaz wanted to make Rockstar but we made Love Aaj Kal instead. And then he made it with Ranbir. His first offer to me was this film called Rockstar

Saif thinks Kareena is Mrs Gram!
Just because I’m not on social media doesn’t mean I don’t know what it is, for God’s sake. I actually was on it (Instagram) and I deleted it because I was finding it, again, I was getting irritated by toxic remarks and it’s taking too much of time and it’s making me frown and I don’t want to get annoyed so literally, Ignorance is bliss. It’s like why would you want to listen to all that. My wife, on the other hand, I think she’s Miss Instagram, Mrs Gram!

Who would Saif block if he was on Instagram?
I’ve looked at a lot of actors’ Instagram things, I must say, I don’t know, I haven’t found a very interesting one because they’re usually like working out or outsights of workout or then eating a bagel somewhere and I’m like ok FAB! I’ve been blocking left right and centre, I’ve blocked so many people, I block it on WhatsApp also. A lot of people, I think, a lot of people.

Saif reveals the name of his autobiography on No Filter Neha!
I think I’ll call my autobiography – I’ll be good from tomorrow. I have said that so often, it’s usually diet based or alcohol-based. And I’d have chapter heading also, like probably ‘shouldn’t have had the whiskey.’

Listen to the full conversation of Neha & Saif on JioSaavan app.