After the three successful seasons, an actress turned host Neha Dhupia is back with the new season of her celebrity chat show ‘No Filter Neha’. In the recent episode, she had Shahid Kapoor on the hot seat where he revealed almost everything about his life. 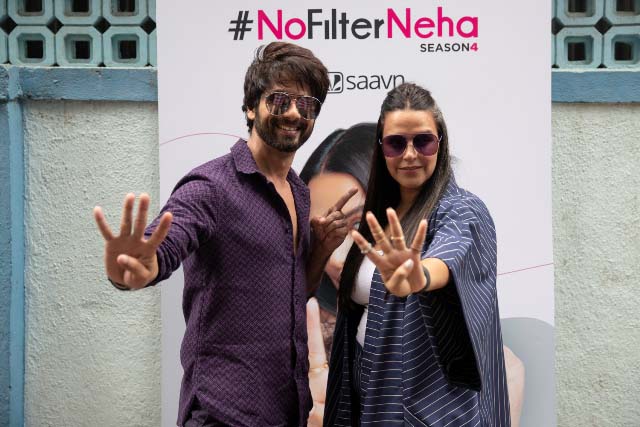 Shahid on his relationship with Mira
We could fight about anything and everything. We have very strong, different points of view and I think for the kind of person I am, I’m very happy that I have somebody like that. Although on a daily basis it might be difficult to deal with it, I know at a larger level, when I look at the bigger picture, I know that she’s really good for me.

I’m guessing I’m also good for her because we always tend to tell each other the part that we’re not seeing ourselves. Like when I’m in a certain situation and dealing with it a certain way, her natural and honest reaction would probably be very different. She would be like, if I was in your place, I would deal with it very differently.

And although sometimes that’s very painful because you just want somebody to understand how you’re feeling, if you want to get out of a situation, I think good advice and a different perspective is more relevant from a pragmatic standpoint. From an emotional standpoint, you might feel like a little needier but I feel like Mira is always able to give me another perspective.

When Misha didn’t recognize Shahid when he was shooting for Padmaavat
I had an identity crisis because she didn’t recognize me! It was at Mira’s parents’ house, I reached there probably a day or two after they had reached because I was just finishing some stuff up, and she just refused to recognize me. She was what, 1.5 at that time and I was dying to hold her and meet her and run around with her and talk to her and she was with the maid taking a walk in the garden, and Mira had gone to meet some relatives, and I reached early and I wanted to take her in my arms and she came to me and started crying.

And then when I was talking to her, she was staring at my mouth and looking at my face and it was not making sense to her because she was like I know that voice but I don’t know this face, I didn’t have my beard. I do look different with and without my beard. It does make a big difference, i shouldn’t have done it like this

Shahid on his sexy body!
It’s not always like that, you know, I want to let everybody know that I don’t look like that round the year. Like right now I’m struggling to get to my best

When Shahid had an entire kilo of Pineapple cake!
It was made of sugar-free! Mujhe bola gaya that iss mein sugar nahi daali hai! toh maine kha liya. I had a bad tummy for three days after that. Because a kilo of cake is like too much to eat!

Who does Shahid think was a better debutante – Ishaan or Janhvi Kapoor?
Ishaan

Who is a more fun co-star according to Shahid?
Kiara Advani

Acting according to Shahid
Acting actually is nothing else but trying to find the truth in a moment and that’s it. You need to be honest and you need to try and find something that’s true because you’re bringing something that doesn’t exist to life. That’s essentially what filmmaking is about. It’s the willing suspension of disbelief. That’s what audiences are supposed to go through when they go to a theatre.

Who would Shahid recast as Geet in Jab We Met?
Alia Bhatt

Who would Shahid recast as Prem in Vivah?
Salman Khan

Who would Shahid recast as Guddu in Kaminey?
Vicky Kaushal

Who would Shahid recast as 3 main leads of Padmaavat?
Actually, the cast of Hum Dil De Chuke Sanam would work well for that film as well