Two of the most awaited Hindi films of the last year, Akshay Kumar’s Sooryavanshi and Salman Khan’s Radhe: Your Most Wanted Bhai are finally releasing in theatres after a year of an unexpected halt due to the Covid pandemic. The announcement is certainly very exciting for fans as well as theatre owners. 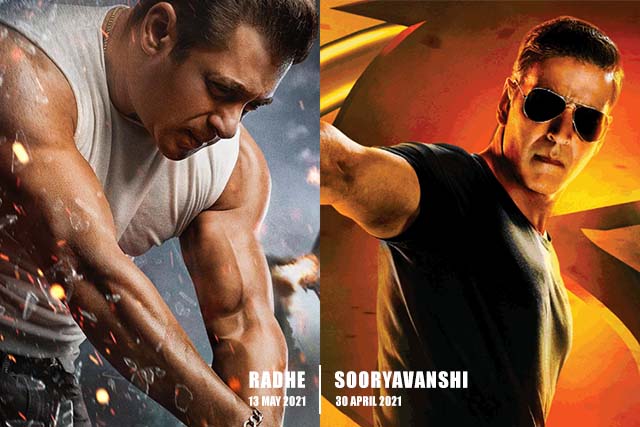 On March 13, superstar Salman Khan took to Twitter and confirmed the release of his forthcoming film Radhe which is scheduled for Eid i.e. 13 May 2021. Directed by Prabhu Deva, the Hindi action-drama is set to enjoy a 4-day extended opening weekend at the box office.

Alongside Salman, Radhe stars Disha Patani, Randeep Hooda, Jackie Shroff & Megha Akash. Reportedly, the film is the remake of a South Korean film The Outlaws which was released in 2017. After Wanted and Dabangg 3, this is the third collaboration of Salman Khan with Prabhu Deva and this time too he is playing a cop.

A day later on March 14, superstar Akshay Kumar announced the release date of his awaited film Sooryavanshi which marks the first collaboration of him with director Rohit Shetty. The Hindi action-thriller which brings Akshay and Katrina Kaif together after more than a decade is set to release on 30 April 2021 in cinemas only.

Sooryavanshi is the fourth instalment in Rohit Shetty’s Cop Universe after Singham, Singham Returns, and Simmba. The film co-stars Gulshan Grover, Abhimanyu Singh, Jackie Shroff, Nikitin Dheer, Javed Jaffrey, and more. It also features Ajay Devgn and Ranveer Singh who are reprising their roles of Singham and Simmba from the previous films of the franchise.