Superstar Akshay Kumar starrer much-anticipated Mission Mangal is rocking at the box office since its release and emerged as his 10th hit in a row. After a fantastic week, now it has started the second week also at a strong note and become the 6th highest-grossing Hindi film of the year so far by dominating Super 30 (146.78 crores) within 10 days of release. 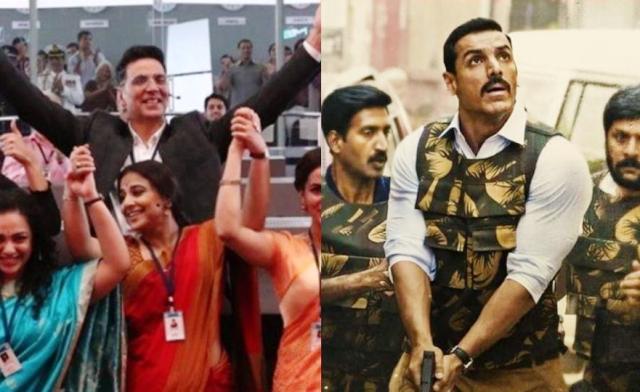 At a superb note, Jagan Shakti’s directorial had raked the business of 128.16 crores in the opening week that included 97.56 crores in the 4-days extended weekend and 30.60 crores on weekdays. Now the film has entered in the second weekend and still has a complete hold over the audience across India.

On 2nd Friday, Mission Mangal showed growth due to Krishna Janmashtami and did the business of 7.83 crores. On the next day i.e. 2nd Saturday, it took a healthy jump and bagged the amount of 13.32 crores. With this, its 10 days total collection has become 149.31 crores nett at the domestic box office.

On the other hand, John Abraham and Mrunal Thakur starrer Batla House had registered a solid opening week despite a clash and has started the second week at a steady note. In a week, it did the business of 65.84 crores that included 47.99 crores in the weekend and 17.85 crores on weekdays.

On 2nd Friday, Nikkhil Advani’s directorial had recorded slight growth and minted 4.15 crores. While on 2nd Saturday, with a good jump in footfalls, Batla House has garnered the business of 6.58 crores and raised its 10 days total domestic collection to 76.57 crores nett. With this, the film has surpassed the lifetime total of Student Of The Year 2 (70.18 crores).