Last week released Housefull 4 is still the first choice of viewers in the second week and running strongly across the country. After performing very well in the second weekend, the film has once again entered on weekdays and surprisingly with a good pace despite a clutter at the box office. 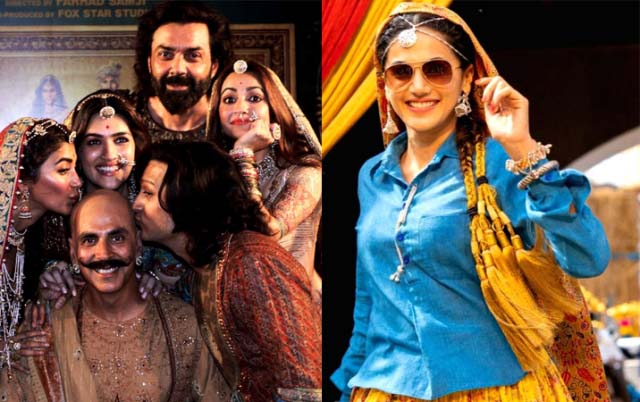 Akshay Kumar starrer the fourth instalment of the franchise Housefull was released amid the high excitement of fans and expectedly got a solid opening despite the mixed word of mouth. In the first week, it did the business of 141.31 crores that included 53.22 crores in the weekend and 88.09 crores on weekdays from 3900 screens.

Now, Farhad Samji’s directorial Housefull 4 is running in the second week and had started the weekend at a good note by collecting 8.05 crores on Friday. Then it took a decent jump in mass centres and minted 10.10 crores on Saturday and 13.12 crores on Sunday.

On 2nd Monday, despite a usual drop in footfalls, Sajid Nadiadwala’s production has managed to collect 5.45 crores and raised its 11 days total collection to 178.03 crores nett at the domestic box office. As per the current trend, HF4 is all set to become the second Hindi film of Akshay to cross the 200-crore mark.

In parallel, there is Taapsee Pannu and Bhumi Pednekar starrer Saand Ki Aankh which had remained under-performed in the first week despite positive reviews and did the business of 11.68 crores with 2.47 crores in the weekend and 9.21 crores on weekdays.

In the second weekend, Tushar Hiranandani’s directorial had maintained a better pace than the first one and bagged the amount of 5.49 crores with 1.28 crore on Friday, 1.89 crores on Saturday & 2.32 crores on Sunday. On 2nd Monday, the film has managed to collect 0.80 crore and raised 11 days total collection to 17.97 crores nett.