Despite the unfavourable reviews from many critics, the much-awaited Housefull 4 is getting good support from the audience nationwide. After an excellent opening week, Akshay Kumar starrer is sustaining very well in the second week too and aiming to enter the 200-crore club by the end of next week. 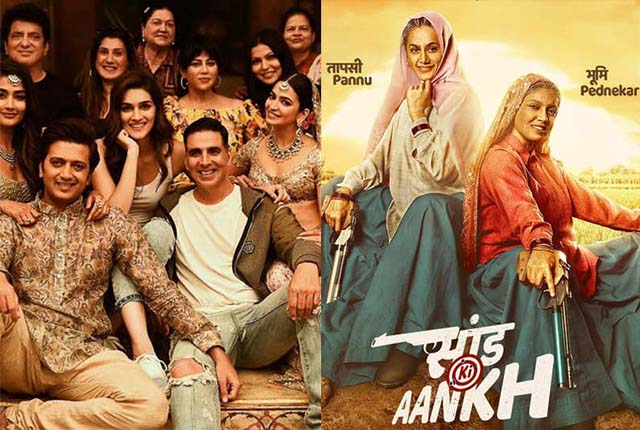 Directed by Farhad Samji, the fourth instalment of the franchise Housefull has unfortunately faced so much negativity on social media but still with the support of the audience, it did a wonderful job and collected the amount of 141.31 crores in the first week that included 53.22 crores in the weekend and 88.09 crores on weekdays from 3900 screens.

Then in the second weekend, Housefull 4 had remained good and did the business of 31.27 crores with 8.05 crores on Friday, 10.10 crores on Saturday & 13.12 crores on Sunday. On 2nd Monday also, it had managed to sustain well and minted 5.45 crores. On the next day i.e. 2nd Tuesday, the film has bagged 4.75 crores and raised 12 days total collection to 182.78 crores nett at the domestic box office.

On the other hand, Taapsee Pannu and Bhumi Pednekar starrer Saand Ki Aankh has gathered a positive word of mouth, but still, in the first week, it had remained underperformed and had raked the business of 11.68 crores with 2.47 crores in the weekend and 9.21 crores on weekdays.

Directed by Tushar Hiranandani, the biographical sports drama had attained a better pace vis-a-vis weekend-1 and garnered 5.49 crores with 1.28 crore on Friday, 1.89 crores on Saturday & 2.32 crores on Sunday. Then on weekdays, after a usual drop, it scored 0.80 crore on 2nd Monday & 0.80 crore on 2nd Tuesday. After 12 days, its total collection has become 18.77 crores nett.