Superstar Ajay Devgn’s much-awaited 100th film, Tanhaji: The Unsung Warrior has already crossed the mark of 175 crores at the domestic box office and now very smoothly heading towards 200-crores. While the adjacent release, Deepika Padukone’s Chhapaak had got crashed within a week and now struggling to get enough response. 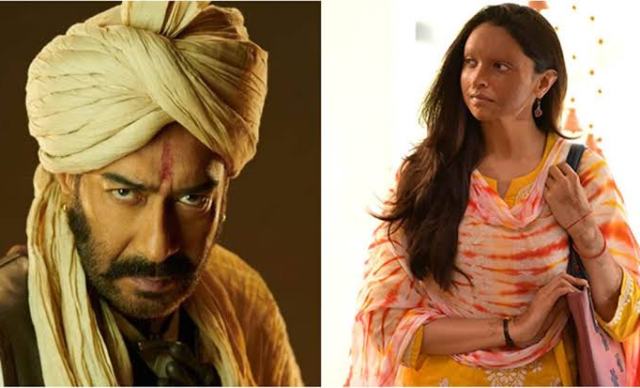 Directed by Om Raut, the period action drama Tanhaji has successfully hit the target right and gathered a positive word of mouth. As a result, it did the business of 118.91 crores in the first week that included 61.75 crores in the weekend and 57.16 crores on weekdays from 3880 screens including Hindi & Marathi versions.

On the other hand, Meghna Gulzar’s directorial Chhapaak has also received positive reviews from critics but got failed to perform desirably at the box office. In the first week, it had raked the business of 28.38 crores with 19.02 crores in the weekend and 9.36 crores on weekdays from 1700 screens.