After a super strong first week, superstar Ajay Devgn’s latest offering co-stars Kajol and Saif Ali Khan, Tanhaji: The Unsung Warrior has maintained a similar pace and passed the second week also at a strong note. With the start of its third week, it is all set to enter the 200-crore club at the domestic box office. 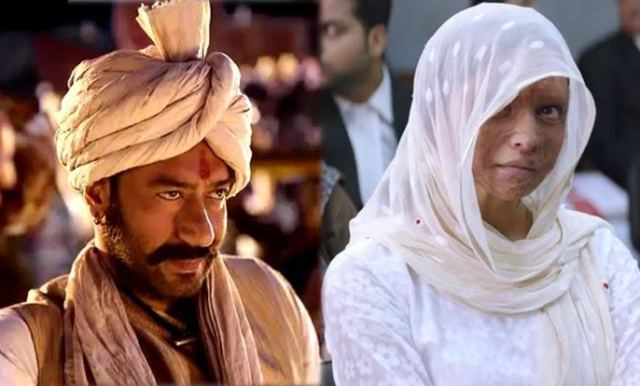 Directed by Om Raut, the period action drama has expectedly gathered a positive word of mouth and as a result, did the business of 118.91 crores in the first week from 3880 screens. In the second weekend, it had remained solid and scored 48.54 crores with 10.06 crores on Friday, 16.36 crores on Saturday & 22.12 crores on Sunday.

Then on weekdays as well, Tanhaji has performed terrifically and had minted the amount of 8.17 crores on 2nd Monday, 7.72 crores on 2nd Tuesday & 7.09 crores on 2nd Wednesday. On the next day i.e. 2nd Thursday, it has managed to collect 7.02 crores and raised 2 weeks total collection to 197.45 crores nett.

On the other hand, Deepika Padukone and Vikrant Massey starrer Chhapaak has also received positive reactions from viewers but unfortunately got failed at the box office. In the first week, it had scored 28.38 crores from 1700 screens. After a significant drop, it had raked 0.95 crore on 2nd Friday, 1.40 crore on 2nd Saturday & 1.75 crores on 2nd Sunday.

Then on weekdays, after a further decline, Meghna Gulzar’s directorial drama film had managed to collect 0.45 crore on 2nd Monday, 0.45 crore on 2nd Tuesday & 0.35 crore on 2nd Wednesday. On 2nd Thursday, it has done the business of 0.30 crore and raised 14 days total collection to 34.03 crores nett.