This Friday released the second instalment in the franchise Mardaani titled Mardaani 2 has taken an overall decent opening at the box office. While the adjacent offering, a Hollywood biggie Jumanji 2: The Next Level has managed to take a good start across India. 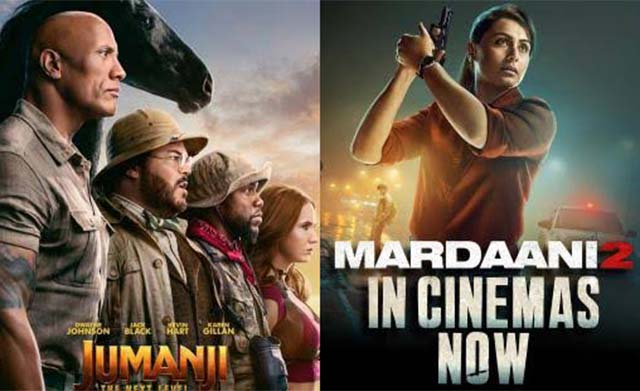 Starring Rani Mukerji, the female-oriented action thriller Mardaani 2 has got succeed to receive mostly positive reviews from critics for its relevant story backed by the terrific performances of all actors. From the audience as well, the film is getting a thumbs up especially in metro cities.

On Friday, Gopi Puthran’s directorial was opened at a low note with around 10% occupancy in the morning. Post noon shows, it showed decent growth and registered the business of 3.80 crores nett from 1600 screens. Its predecessor Mardaani had managed to secure 3.46 crores on the opening day in 2014.

On the other hand, Dwayne Johnson starrer Jumanji 2: The Next Level has received mixed reviews from critics but partly got succeed to create the desired impact on the Indian audience. On Thursday, with its paid previews, the film had bagged the amount of 1.15 crore.

On Friday, the sequel to 2017’s Jumanji: Welcome to the Jungle took a decent start in India with around 20% occupancy in the morning. Over the evening & night shows, Jake Kasdan’s directorial did witness a good boost in multiplexes and raked 5.05 crores nett (6.20 crores nett incl. Thu previews) including all the versions.