Despite having the new release Saaho in parallel, the already existing space drama Mission Mangal is running steadily at the box office and inching towards the 200-crore mark. On the other hand, action-thriller Batla House is taking small but steady steps towards the 100-crore mark. 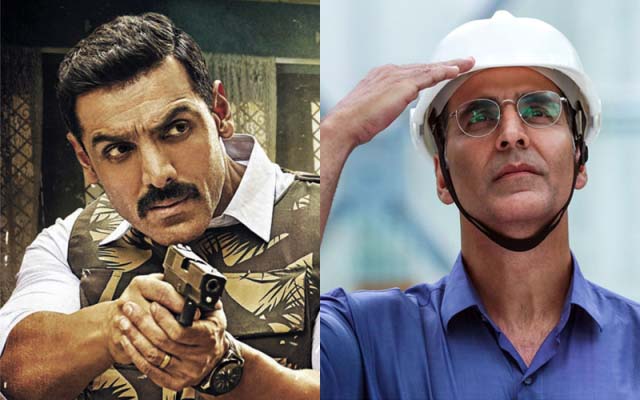 With a solid word of mouth, Superstar Akshay Kumar and Vidya Balan starrer Mission Mangal did the business of 128.16 crores in the 8-days extended opening week & 49.95 crores in the second. In the third weekend as well, it had maintained a good pace and raked 9.09 crores with 2.20 crores on Friday, 3.25 crores on Saturday & 3.64 crores on Sunday.

Directed by Jagan Shakti, the film is now running on weekdays and still has enough hold over the audience. On 3rd Monday, due to Ganesh Chaturthi holiday, it had minted 2.27 crores. After usual drops, Fox Star Studios’ presentation bagged the amount of 1.21 crores on 3rd Tuesday & 1.15 crores on 3rd Wednesday. After 21 days, its total collection has become 191.83 crores nett.

In parallel, John Abraham and Mrunal Thakur starrer Batla House had garnered the business of 65.84 crores in the 8-days first week and 25.92 crores in the second. In the third weekend, after a slowdown, it had collected 3.16 crores with 0.73 crore on Friday, 0.91 crore on Saturday & 1.52 crores on Sunday.

On 3rd Monday, Nikkhil Advani’s directorial had managed to score 0.70 crore. On the next day i.e. 3rd Tuesday, it had raked the amount of 0.55 crore. While on 3rd Wednesday, Panorama Studios’ presentation has done the business of 0.45 crore and raised 21 days total collection to 96.62 crores nett.