After an excellent opening on Friday, the latest Hindi romantic comedy Pati Patni Aur Woh has witnessed a good jump in footfalls on Saturday. While the historical drama Panipat is struggling to attain the desired pace, though it has also recorded decent growth after a dull start. 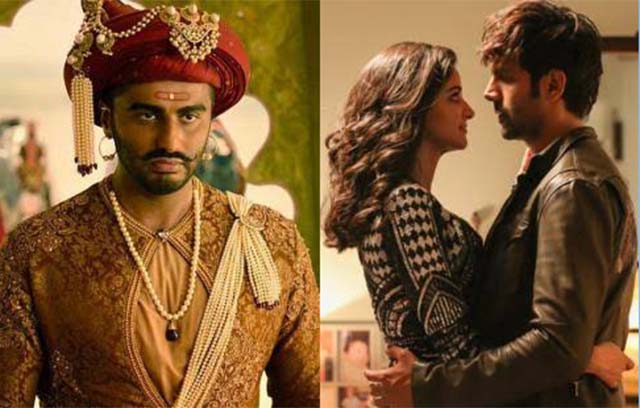 Starring Kartik Aaryan, Bhumi Pednekar, and Ananya Panday in lead roles, Mudassar Aziz’s directorial has got succeed to entertain many in theatres and gathered a positive word of mouth. For its entertaining storyline backed by the commendable performances, it has received thumbs up from critics.

On Friday, Pati Patni Aur Woh was opened at a good note and registered the biggest opening of Kartik Aaryan by collecting 9.10 crores. On Saturday, it took a jump of 35.49% vis-a-vis Friday and minted 12.33 crores. After 2 days, it has done the business of 21.43 crores nett from 2850 screens nationwide.

On the other hand, Ashutosh Gowariker’s directorial Panipat has also convinced the critics with its gripping storyline backed the solid performances of lead actors Sanjay Dutt, Arjun Kapoor, and Kriti Sanon. But still, it is not getting the desired response from the audience.

On Friday, Panipat had started the journey at a dull note and managed to collect the opening business of only 4.12 crores. On Saturday, it has taken a jump of 40.29% vis-a-vis Friday and bagged the amount of 5.78 crores. After 2 days, its total collection has become 9.90 crores nett from 2395 screens.