After a solid opening on Friday, superstar Ajay Devgn’s 100th film Tanhaji: The Unsung Warrior has shown a healthy jump on Saturday due to positive word of mouth. While Deepika Padukone’s Chhapaak has also witnessed good growth after a decent opening. 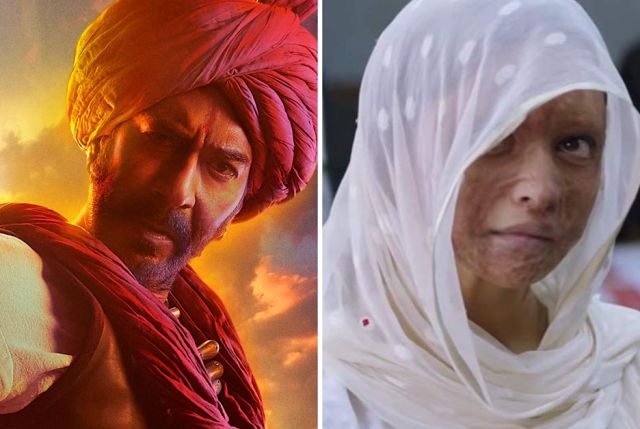 Directed by Om Raut, the first Hindi biggie of the year 2020, Tanhaji has got succeed to convince critics with its strong storyline backed by the powerful performances of leading actors and received positive reviews. From the audience as well, it is getting an excellent response across the country.

On Friday, T-Series Films’ presentation was opened at a good note in the morning and had registered the 4th best opening of Ajay’s career with 15.10 crores. On Saturday, it took a jump of 39.73% and minted 20.57 crores. After 2 days, its total collection has become 35.67 crores from 3880 screens including Hindi & Marathi versions.

In parallel, Meghna Gulzar’s directorial drama film Chhapaak has also got succeed to make an impact on viewers and gathered a positive word of mouth. Being a serious story based on a true incident of the acid attack, it doesn’t attract the major audience but getting a decent response from multiplexes.

On the opening day, Fox Star Studios’ presentation had started the journey at an ordinary note and collected 4.77 crores. On the next day i.e. Saturday, it has recorded a jump of 35.01% and raked 6.90 crores. After 2 days, its total collection has become 11.67 crores nett at the domestic box office from 1700 screens.