After an excellent opening weekend, Kangana Ranaut starrer magnum opus Manikarnika: The Queen of Jhansi has witnessed a significant drop in footfalls on Monday. While the adjacent release Thackeray is struggling outside Maharashtra and registered a decent weekend at the domestic box office. 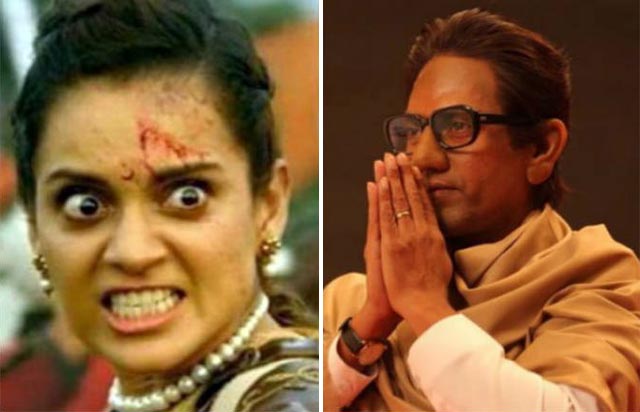 Directed by Krish Jagarlamudi & Kangana, the Hindi period drama Manikarnika: The Queen of Jhansi has got succeed to receive mostly positive reviews from the critics as well as the audience. On Friday, it took an average start and managed to register a decent opening business of 8.75 crores.

Over the weekend, Zee Studios’ presentation witnessed remarkable growth and bagged 18.10 crores on Saturday & 15.70 crores on Sunday. On Monday, Manikarnika faced a drop of 40% than Friday and minted 5.10 crores. With this, its 4 days domestic total has become 47.65 crores nett from 3000 screens including Hindi, Tamil & Telugu.

On the other hand, Nawazuddin Siddiqui starrer biographical drama Thackeray has received positive reviews but also faced a competition due to Manikarnika & already existing Uri The Surgical Strike. In the opening weekend, it did the business of 22.90 crores which included 6 crores on Friday, 10 crores on Saturday & 6.90 crores on Sunday.

Then on Monday, Abhijit Panse’s directorial recorded a drop of 51.67% than Friday and managed to collect the amount of 2.90 crores. With this, the total collection of Thackeray after 4 days has become 25.80 crores nett from around 1500 screens including Hindi & Marathi.