As expected, after the Diwali festivities, the latest Hindi offering Housefull 4 has attained a tremendous pace and finally joined the 100-crore club at the domestic box office within 5 days of release. With this, it has become the 13th film of superstar Akshay Kumar and 14th film of the year to cross this mark. 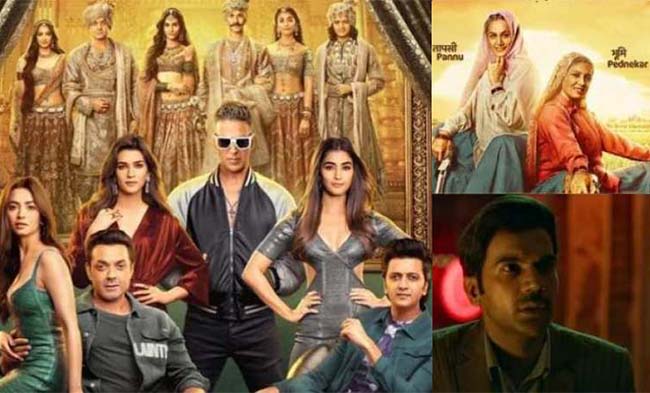 Directed by Farhad Samji, the fourth instalment of Housefull franchise has unfortunately got failed to convince many critics, as they have found it weak in content. Still, the audience is showing good support across the country, which can be seen in excellent box office numbers.

Housefull 4 was opened at a very good note on Friday and remained steady throughout the weekend. In the first 3 days, at a steady note, it did the business of 53.22 crores that included 19.08 crores on Friday, 18.81 crores on Saturday, and 15.33 crores on Sunday.

On Monday, Sajid Nadiadwala’s production took a remarkable jump and raked the business of 34.56 crores. On the next day i.e. Tuesday, it has managed to collect 24.04 crores despite a drop and raised 5 days total collection to 111.82 crores nett from 3900 screens nationwide.

In parallel, Taapsee Pannu and Bhumi Pednekar starrer Saand Ki Aankh had remained under-performed in the weekend despite positive reviews and did the business of 2.47 crores with 0.48 crore on Friday, 1.08 crore on Saturday & 0.91 crore on Sunday. Post-Diwali, the film has picked up strongly and minted the amount of 3.19 crores on Monday and 2.85 crores on Tuesday. After 5 days, its total collection has become 8.51 crores nett.

On the other hand, Rajkummar Rao and Mouni Roy’s Made In China had performed slightly better than Saand Ki Aankh and scored 3.75 crores in the weekend with 1 crore on Friday, 1.50 crore on Saturday & 1.25 crore on Sunday. On Monday, after a good jump, the film had minted 3 crores, while collected 1.75 crores on Tuesday. After 5 days, its total collection has become 8.50 crores nett.