The new Hindi offering Pagalpanti has got failed to create the desired impact on viewers and struggling at the box office. After an under-performed opening weekend, it is crashing down on weekdays, while the adjacent Hollywood release Frozen 2 is running strongly. 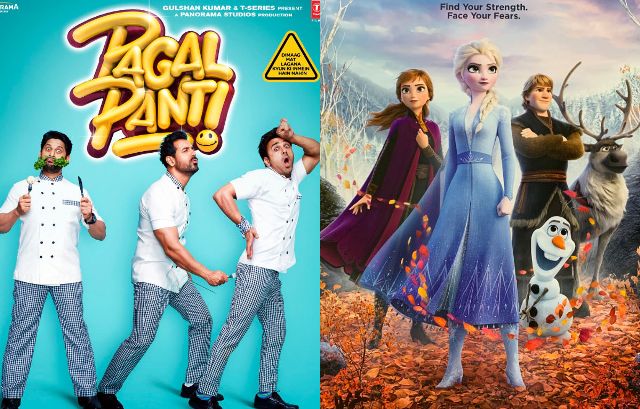 Directed by Anees Bazmee, the multi-starrer Hindi comedy film has received mostly unfavourable reviews from critics. From the audience also, it is getting mixed reactions across the country because of its unconvincing storyline.

Pagalpanti was opened at a dull note and remained under-performed throughout the weekend. It did the business of 19.50 crores in the first 3 days that included 4.75 crores on Friday, 6.50 crores on Saturday & 8.25 crores on Sunday. Now it is running on weekdays and has witnessed a significant drop in footfalls.

On Monday, after a drop of 47.37% vis-a-vis Friday, the film had raked the business of 2.50 crores. On the next day i.e. Tuesday, it has managed to collect 2.30 crores and raised its 5 days total collection to 24.30 crores nett at the domestic box office.

On the other hand, the Hollywood release Frozen 2 has registered a solid opening weekend in India and did the business of 19.10 crores with 3.35 crores on Friday, 7.10 crores on Saturday & 8.65 crores on Sunday. On weekdays, at a steady note, it has managed to collect 1.80 crores on Monday & 1.50 crores on Tuesday and raised 5 days total collection to 22.40 crores nett.