Kartik Aaryan, Bhumi Pednekar, and Ananya Panday starrer Pati Patni Aur Woh had successfully passed the opening weekend at a solid note and now holding well on weekdays as well. While the adjacent release Panipat had remained overall dull in the weekend and now struggling at the box office. 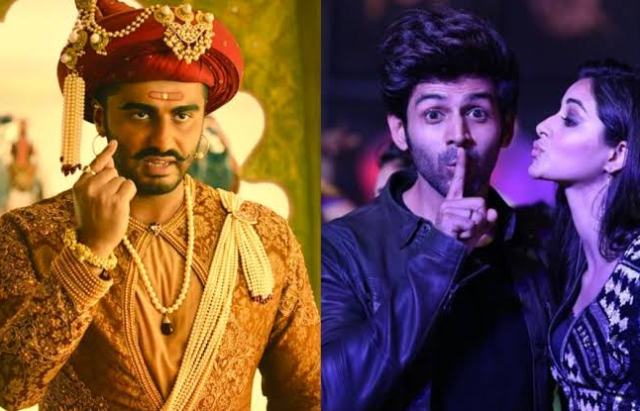 Directed by Mudassar Aziz, the Hindi romantic comedy has entertained many in theatres and gathered a good word of mouth. As a result, it took an excellent start and raked the business of 35.94 crores nett in the weekend that included 9.10 crores on Friday, 12.33 crores on Saturday & 14.51 crores on Sunday.

T-Series Films & BR Studios’ presentation Pati Patni Aur Woh is now running on weekdays and still has a strong pace. On Monday, it had faced a drop of 37.36% vis-a-vis Friday and minted 5.70 crores. On the next day i.e. Tuesday, it has managed to collect 5.35 crores and raised 5 days total collection to 46.99 crores nett from 2850 screens.

In parallel, Ashutosh Gowariker’s directorial Panipat has also got succeed to convince many critics but still not getting the desired response from the audience. In the opening weekend, it had bagged the amount of 17.68 crores nett with 4.12 crores on Friday, 5.78 crores on Saturday & 7.78 crores on Sunday.

Then on weekdays, Sanjay Dutt, Arjun Kapoor, and Kriti Sanon starrer has dropped significantly and did the business of 2.59 crores on Monday. On the next day i.e. Tuesday, Panipat has managed to collect 2.21 crores and raised 5 days total collection to 22.48 crores nett from 2395 screens nationwide.