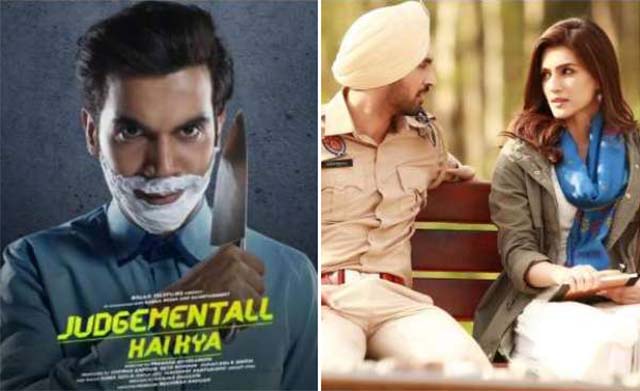 Directed by Prakash Kovelamudi, the Hindi film Judgementall Hai Kya has expectedly got succeed to entertain critics as well as the audience and gathered a positive word of mouth. In the weekend, it had raked the business of 22.04 crores that included 5.40 crores on Friday, 8.02 crores on Saturday & 8.62 crores on Sunday.

On Monday, Balaji Motion Pictures & Karma Media And Entertainment’s production had faced a significant drop and minted the amount of 2.60 crores. On the next day i.e. Tuesday, it has managed to collect 2.62 crores and raised 5 days total collection to 27.26 crores nett.

On the other hand, the adjacent Hindi release Arjun Patiala has got failed to entertain the audience and received mostly negative reviews from critics. In the opening weekend, it did the business of 5.40 crores with 1.50 crores on Friday, 1.80 crores on Saturday & 2.10 crores on Sunday.

On Monday, after a major drop in footfalls, Rohit Jugraj’s directorial had bagged the amount of 0.60 crore. On the next day i.e. Tuesday, with a further decline, it has garnered the business of 0.50 crore and raised 5 days total collection to 6.50 crores nett at the domestic box office.