The first film of Kartik Aaryan & Kriti Sanon together, Luka Chuppi is being liked by everyone. Since its release, the film is running excellently at the box office and registered a solid opening weekend. Now on weekdays as well, it is holding well across the country and heading to become a hit soon. 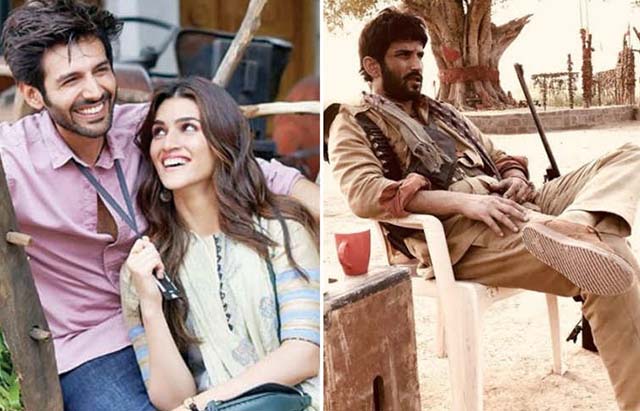 Produced by Dinesh Vijan under the banner Maddock Films, Laxman Utekar’s directorial is a fun-filled romantic comedy. It has received mostly positive reviews from the critics as well as the audience. Due to a good word of mouth, it did the business of 32.13 crores in the opening weekend which included 8.01 crores on Friday, 10.08 crores on Saturday & 14.04 crores on Sunday.

On Monday, due to Maha Shivratri holiday, Luka Chuppi remained strong and collected the business of 7.90 crores. On the next day i.e. Tuesday, it recorded a drop of 31.65% and minted the amount of 5.04 crores. With this, the 5 days total collection of the film has become 45.07 crores nett at the domestic box office from 2100 screens.

In parallel, Sushant Singh Rajput, Bhumi Pednekar & Manoj Bajpayee starrer Sonchiriya is struggling at the box office despite getting positive feedback from the critics as well as the audience. In the opening weekend, it did the business of only 4.60 crores with 1.20 crore on Friday, 1.50 crore on Saturday & 1.90 crores on Sunday.

Abhishek Chaubey’s directorial is now running on weekdays, but due to Maha Shivratri holiday on Monday, it managed to collect the amount of 1.10 crore. On Tuesday, Sonchiriya expectedly witnessed a significant drop in footfalls and collected 0.70 crore. After 5 days, its total domestic collection has become 6.40 crores nett from 720 screens nationwide.