The highly-awaited Housefull 4 continues its positive trend at the box office and emerged as the biggest grosser of the franchise by dominating Housefull 2 (114 crores) within 6 days of release. Despite the mixed word of mouth and having a couple of opponents- Saand Ki Aankh & Made In China, it is getting good support from the audience nationwide. 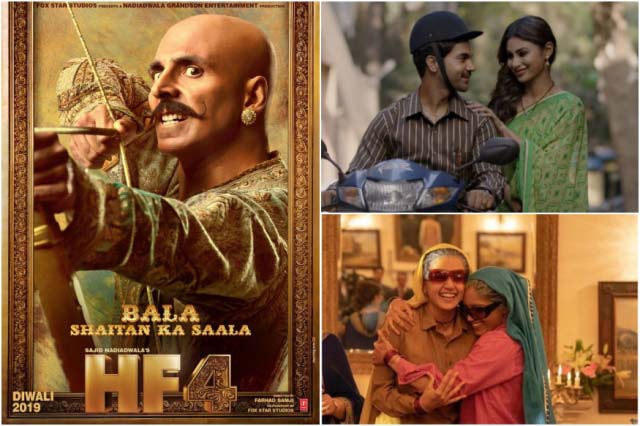 Starring Akshay Kumar, Riteish Deshmukh, Bobby Deol, Kriti Sanon, Kriti Kharbanda, and Pooja Hegde in lead roles, the Hindi slapstick-comedy has unfortunately received mostly negative reviews from critics as they have found it weak in content but the audience has mixed opinion about it.

Amid the solid initial buzz, Housefull 4 was opened at an excellent note and had raked the business of 53.22 crores in the opening weekend that included 19.08 crores on Friday, 18.81 crores on Saturday, and 15.33 crores on Sunday. Now in weekdays, expectedly, the film is running strongly.

On Monday, after a massive jump, Farhad Samji’s directorial had minted the amount of 34.56 crores. While on Tuesday, it had managed to collect 24.04 crores. On the next day i.e. Wednesday also, the film has remained strong and bagged 16.35 crores. After 6 days, its total collection has become 128.17 crores nett at the domestic box office from 3900 screens.

On the other hand, Taapsee Pannu and Bhumi Pednekar starrer Saand Ki Aankh had remained under-performed in the weekend and did the business of only 2.47 crores. In weekdays, it has gained a good pace and minted 3.19 crores on Monday, 2.85 crores on Tuesday & 1.63 crores on Wednesday. After 6 days, its total collection has become 10.14 crores nett.

In parallel, Rajkummar Rao and Mouni Roy’s Made In China had started the journey slightly better than Saand Ki Aankh and raked 3.75 crores in the weekend. Now in weekdays, it has also picked up well and minted 3 crores on Monday, 1.75 crores on Tuesday & 1.10 crores on Wednesday. With this, its 6 days total collection has been raised to 9.60 crores nett.