Superstar Ajay Devgn’s 100th film, Tanhaji: The Unsung Warrior has finally joined the 100-crore club at the domestic box office within just 6 days of release despite having Deepika Padukone’s much-anticipated Chhapaak in its parallel along with the already existing Akshay Kumar’s Good Newwz. 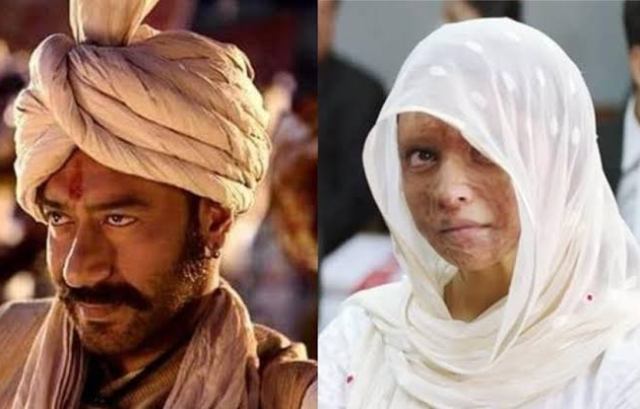 Directed by Om Raut, the period action drama has expectedly gathered a positive word of mouth and as a result, running strongly at the box office since its release. In the opening weekend, it had raked the business of 61.75 crores that included 15.10 crores on Friday, 20.57 crores on Saturday & 26.26 crores on Sunday.

Tanhaji is now running on weekdays and still has a solid hold over the audience across the country. On Monday, it had managed to collect 13.75 crores, while scored 15.28 crores on Tuesday after a good jump. On Wednesday, with further growth, it has bagged 16.72 crores and raised 6 days total collection to 107.68 crores nett from 3880 screens including Hindi & Marathi versions.

On the other hand, Meghna Gulzar’s directorial drama film based on the life of an acid attack survivor, Chhapaak has also got succeed to impress many in theatres and gathered positive word of mouth. Still, it didn’t get the desired response at the box office and garnered 19.02 crores in the weekend with 4.77 crores on Friday, 6.90 crores on Saturday & 7.35 crores on Sunday.

On weekdays, Fox Star Studios’ presentation co-stars Vikrant Massey has recorded a significant drop in footfalls. On Monday, it had managed to collect 2.35 crores, while collected 2.55 crores on Tuesday. On the next day i.e. Wednesday, the film has done the business of 2.61 crores and raised 6 days total collection to 26.53 crores nett from 1700 screens.