After an under-performed weekend, Pagalpanti has remained decent on weekdays and registered an average opening week. Unfortunately, it has got failed to attain the desired pace at the box office, while the Hollywood offering Frozen 2 has got a solid response from the Indian audience throughout. 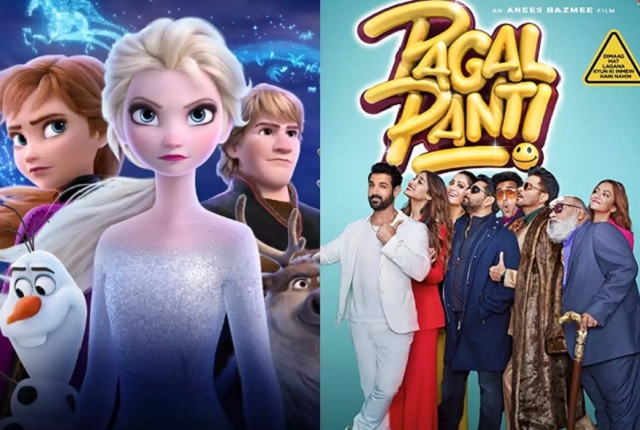 Directed by Anees Bazmee, the multi-starrer comedy film has received mostly unfavourable reviews from critics as well as the audience for its unconvincing storyline and gathered a dull word of mouth. As a result, in the weekend, it did the business of only 19.50 crores with 4.75 crores on Friday, 6.50 crores on Saturday & 8.25 crores on Sunday.

Then on weekdays, T-Series Films’ production Pagalpanti had witnessed a significant drop in footfalls and raked the business of 2.50 crores on Monday, 2.30 crores on Tuesday & 2.05 crores on Wednesday. On the next day i.e. Thursday, it has managed to collect 1.85 crores and raised one week total collection to 28.20 crores nett.

On the other hand, the adjacent release Disney’s presentation Frozen 2 is getting a wonderful response from the audience across the country. At a strong note, it did the business of 19.10 crores that included 3.35 crores on Friday, 7.10 crores on Saturday & 8.65 crores on Sunday.

On weekdays, after a usual drop, it has remained steady and did the business of 1.80 crores on Monday, 1.50 crore on Tuesday & 1.50 crore on Wednesday. On Thursday, with a further decline, it has bagged the amount of 1.30 crore and raised 7 days total collection to 25.20 crores nett (30 crores gross).