Based on the 1983 Cricket World Cup, the latest film ’83 has almost done well in the opening weekend and has registered a business of 47 crores within 3 days at the domestic box office including all versions and formats. However, being a mega-budget offering, it should have scored higher each day. 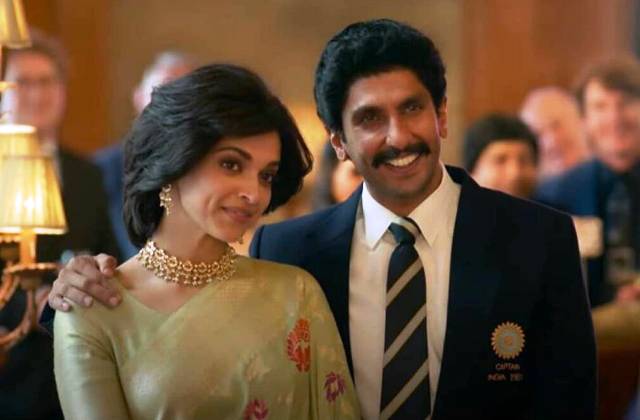 Featuring Ranveer Singh as the legendary cricketer Kapil Dev, the period sports drama ’83 has managed to make a solid impression on the critics as well as the audience and garnered positive word of mouth. Director Kabir Khan and all the actors are being appreciated by everyone for their hard work.

Despite all the positives, ’83 has not received the expected response at the box office. Barring major national multiplex chains, the film has registered poor performance across the country. On Friday, it opened with an overall 25% occupancy in the morning and did a business of 12.64 crores net with an average growth post noon shows.

On Saturday, ’83 missed a big jump in footfalls despite the Christmas holiday and bagged an amount of 16.95 crores net. Then on Sunday, with slight growth, the film added 17.41 crores to its account and registered a total of 47 crores net within 3 days from 3741 screens including Hindi, Tamil, Telugu, Kannada, and Malayalam versions.

From the Hindi versions alone, the film ’83 managed to rake 44.41 crores net which included 11.96 crores on Friday, 16 crores on Saturday, and 16.45 crores on Sunday from 3374 screens. Whereas last week released Spider-Man: No Way Home minted 26.85 crores in the second weekend and increased its total to 174.92 crores net in India.