Among a bunch of new offerings, the two major releases of this Friday- Hollywood action-adventure Aquaman & Marathi action drama Mauli have hit the screens across India amid good excitement of fans. As expected, both the offerings have recorded a solid opening at the Indian box office. 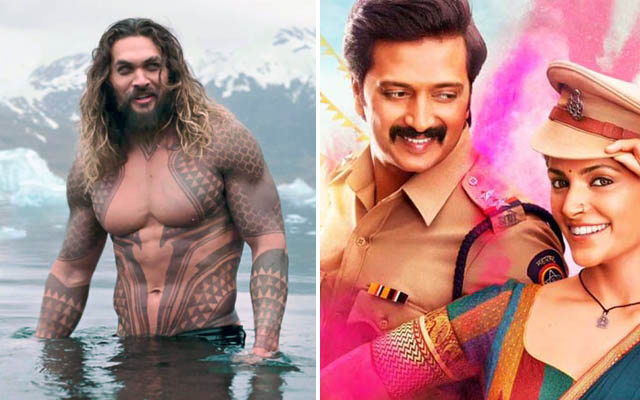 Presented by Warner Bros, Jason Momoa & Amber Heard starrer the much-awaited DC superhero film Aquaman has got succeed to hit the target right and received mostly positive reviews from the critics worldwide. From the Indian audience as well, it is gathering positive feedback and as a result, gained a favorable word of mouth.

On the opening day, Aquaman took a fair start and witnessed a usual jump in footfalls over the evening & night shows in metro cities and successfully managed to collect the amount of 5.50 crores on Friday. On Thursday, the film bagged 2 crores from its paid previews, so its opening day collection can be considered as 7.50 crores which is good enough.

On the other hand, Riteish Deshmukh & Saiyami Kher starrer Mauli is the highly-awaited Marathi film of the year. Directed by Aditya Sarpotdar, it has got succeed to make the desired impact on viewers and received mostly positive reviews from the critics.

After the Marathi blockbuster Lai Bhaari, Riteish is back with its sequel which has taken a good start at the box office. On Friday, Mauli opened on a solid note and registered the business of 3.25 crores across India, which is slightly higher than the opening business of Lai Bhaari (3.10 crores).

As per the current trend, both Aquaman & Mauli are expected to show a good growth over the weekend because of positive word of mouth.