Jason Momoa & Amber Heard starrer the highly-awaited superhero movie Aquaman has registered a solid opening in India despite the presence of successfully-running 2.0 & Kedarnath. Like many Hollywood movies did this year, Warner Bros’ latest presentation is leading over all the new & existing Hindi offerings at the Indian box office. 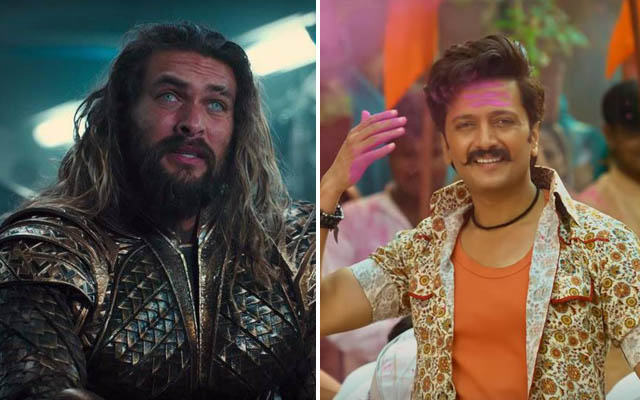 Directed by James Wan, the sixth installment of DC Extended Universe, Aquaman has got succeed to make the desired impact on viewers and received mostly positive reviews from the critics. On a good note, the movie did the business of 5.50 crores on Friday, while on Thursday also, it collected 2 crores from its paid previews.

On Saturday, it took a fair jump and minted the amount of 7.75 crores. On the next day i.e. Sunday, with a further drop, Aquaman bagged 8.75 crores and raised 3 days total collection to 24 crores nett from Indian screens including English, Hindi & Tamil.

The sequel to 2014’s Marathi blockbuster Lai Bhaari, Mauli has also made the entry this Friday at the box office and expectedly getting a terrific response from the audience across Maharashtra & nearby states. With positive feedback, it opened on a solid note and registered the opening business of 3.25 crores.

On Saturday, Riteish Deshmukh & Saiyami Kher starrer witnessed a good jump and minted 3.75 crores. With a further growth in footfalls, Mauli scored 4 crores on Sunday and raised its 3 days total collection to 11 crores at the domestic box office.