The new Hindi release of this weekend is a thriller drama Badla which has a decent buzz among moviegoers. But it has a mammoth opponent to face at the box office, hugely-awaited Captain Marvel. The American superhero film has a wide release in India, while the Hindi one is releasing on limited screens. 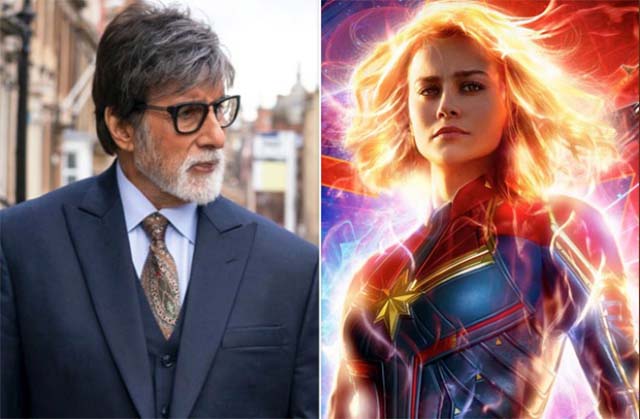 Directed by the very promising Sujoy Ghosh, Badla brings megastar Amitabh Bachchan & Taapsee Pannu together once again after the critically-acclaimed Pink. Despite being produced by superstar Shahrukh Khan, all the buzz it has made so far is only because of the leading actors & of course the intriguing trailer.

Badla is an adaptation of Spanish film The Invisible Guest that was released in 2017. Being a thriller drama, Azure Entertainment’s co-production attracts a limited audience and also has a biggie in parallel, so it is expected to open in a range of 3-4 crores from around 750 screens. In 2016, courtroom drama Pink was opened at 4.32 crores.

On the other hand, the 21st film in the Marvel Cinematic Universe, Captain Marvel is one of the most-awaited films of the year. Since Avengers: Infinity War all the Hollywood fans worldwide including India were eagerly waiting for it and now when it is in theatres, one can expect a storm at the box office.

In India, Captain Marvel is releasing across 2000 screens including English, Hindi, Tamil & Telugu versions by Walt Disney Studios. With such high screen count & solid buzz, it is expected to open in a range of  7-8 crores which is strong enough on a normal working day with India Vs Australia cricket match.