This Friday, a couple of Hindi films with different genres- Tanhaji: The Unsung Warrior and Chhapaak are set to hit theatres amid the high excitement of fans. Both the offerings have good initial hype among the audience and expected to take an overall good start at the box office despite the presence of successfully running Good Newwz. 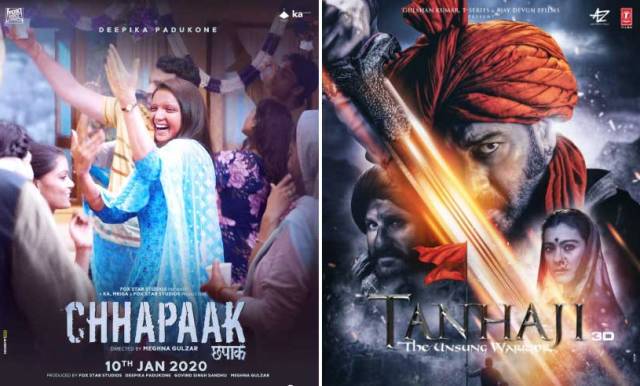 Superstar Ajay Devgn’s latest flick with Saif Ali Khan and Kajol, Tanhaji: The Unsung Warrior is creating a buzz since it was announced last year. With its promos as well, the film has boosted the hype and positively expected to be the first choice of viewers this week.

Being a period action drama & having solid star power, Om Raut’s directorial has mass appeal. As per the report & the current scenario, T-Series’ presentation seems capable to open in a range of 12-14 crores nett which is good enough as there are other films also present at the box office.

On the other hand, Deepika Padukone and Vikrant Massey starrer heroine-centric drama film Chhapaak is based on the life of acid attack survivor Laxmi Agarwal. Meghna Gulzar’s directorial doesn’t have much hype as compared to Tanhaji but over the last couple of days, it has grabbed good public attention due to Deepika’s JNU visit.

Presented by Fox Star Studios, Chhapaak is not an entertainer but a serious film inspired by a true incident. This is why it does attract only the multiplex audience and expected to take the opening in a range of 5-6 crores nett. Word of mouth will decide its fate at the box office.