The first-ever collaboration of Luv Ranjan’s Luv Films & Bhushan Kumar led T-Series Films, De De Pyaar De refuses to slow down at the box office in its second week despite the presence of several new Hindi & English offerings. Akiv Ali’s directorial romantic comedy is still holding well across the country and has crossed the mark of 80 crores within 12 days. 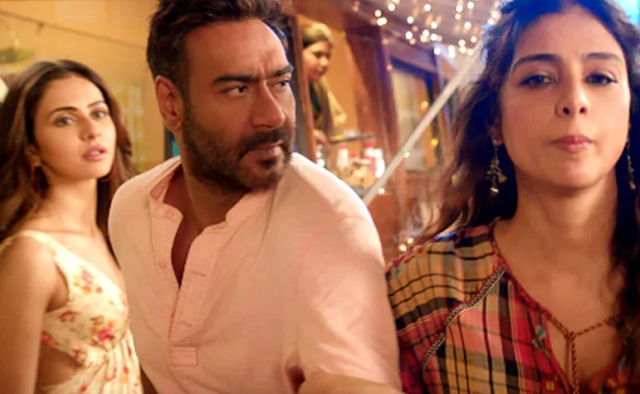 Superstar Ajay Devgn, Tabu & Rakul Preet Singh starrer was opened at a decent note and successfully attained a solid pace afterwards. In the first week, it did the business of 61.05 crores with 38.54 crores in the weekend & 22.51 crores on weekdays from 3100 screens across India.

In the second weekend as well, De De Pyaar De remained strong despite several new releases and bagged the amount of 14.04 crores that included 3.58 crores on Friday, 4.78 crores on Saturday & 5.68 crores on Sunday. Now the film is running on weekdays and still has a good hold over the audience.

On 2nd Monday, DDPD had witnessed a drop of 23.74% vis-a-vis 2nd Friday and minted the amount of 2.73 crores. On the next day i.e. 2nd Tuesday, with a slight drop, it managed to collect 2.37 crores and raised 12 days total collection to 80.19 crores nett at the domestic box office.

As per the current trend, De De Pyaar De is expected to rake over 84 crores nett by the end of this week and approx. 90 crores until Salman Khan’s highly-awaited Bharat gets released. After that, it won’t be easy for the film to stand unaffected at the box office.