After the two successful weeks, the Hindi romantic comedy De De Pyaar De has passed its third week at a decent note. Despite the release of Salman Khan’s biggie Bharat on this Wednesday, it continued to get enough response from the audience and silently approaching towards the 100-crore mark. 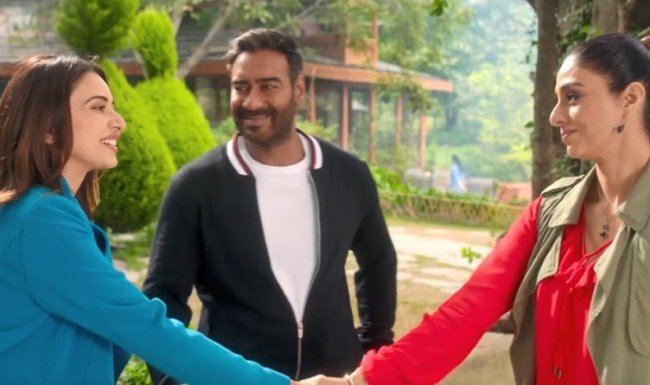 Superstar Ajay Devgn, Tabu and Rakul Preet Singh starrer got succeed to hit the target right and gathered a good word of mouth. As a result, it managed to rake the business of 8.59 crores in the third weekend with 1.96 crores on Friday, 2.82 crores on Saturday and 3.81 crores on Sunday.

Then on weekdays, De De Pyaar De recorded a normal drop in footfalls and minted the amount of 1.42 crore on 3rd Monday and 1.36 crore on 3rd Tuesday. After the release of Bharat, it got affected by a significant rate and did the business of 0.65 crore on 3rd Wednesday.

On the next day i.e. 3rd Thursday, Akiv Ali’s directorial bagged the amount of 0.50 crore and raised its 3 weeks total collection to 97.01 crores nett at the domestic box office. In the last 2 weeks, it did the business of 84.49 crores that included 61.05 crores in the first & 23.44 crores in the second one.

Jointly produced by Bhushan Kumar led T-Series and Luv Ranjan’s Luv Films, De De Pyaar De still has enough hold over the audience in north India and positively expected to touch the mark of 100-crore by the end of its fourth week.