Ranveer Singh starrer period sports drama ’83 somehow managed to garner close to 100 crores including all the versions at the domestic box office within 14 days and is all set to enter the club by the third weekend. But being a mega-budget film, it still has a long way to go to make up for the loss. 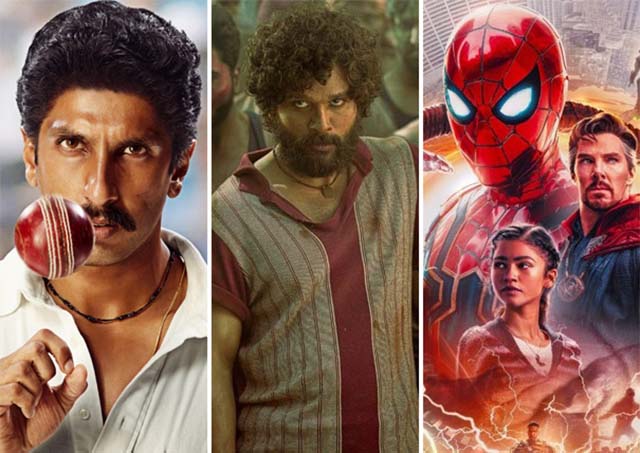 On the other hand, Allu Arjun and Rashmika Mandanna starrer PAN-India film Pushpa: The Rise has shown a rock-solid trend in the third week from its Hindi version despite competition and COVID restrictions. On a strong note, it garnered 26.95 crores in week 1 and 20.24 crores in week 2.

In parallel, Hollywood offering Spider-Man: No Way Home has also recorded a decent response in the third week. On a fantastic note, Tom Holland starrer did a business of 148.07 crores in the 8-day extended week 1 and 41.60 crores in week 2. At the third weekend, it collected 3 crores on Friday, 4.92 crores on Saturday and 4.75 crores on Sunday.

On weekdays, Spider-Man: No Way Home showed a downtrend and raked 1.61 crores on Monday, 1.32 crore on Tuesday and 1.13 crore on Wednesday. With a further drop, the film reported a business of 0.91 crore and increased its 22-day total collection to 207.31 crores nett (264.26 crores gross) at the Indian box office.