Ranveer Singh starrer, period sports-drama ’83 has received huge disappointment at the box office. Despite positive comments from leading sections of the industry and critics, the mega-budget offering failed to attract the audience. After below-average performance over the weekend, many centres across the country have replaced the shows of ’83 with Spider-Man: No Way Home and Pushpa: The Rise. 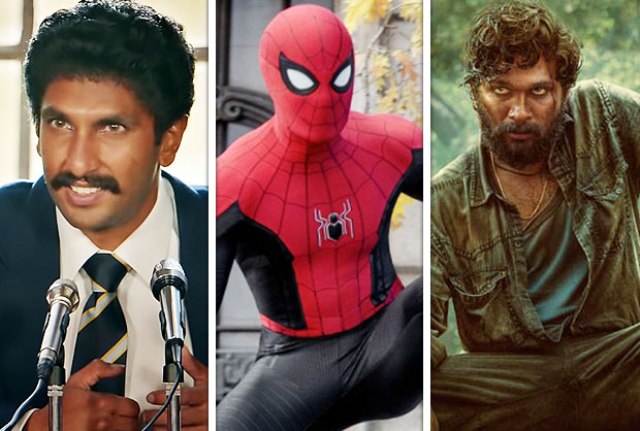 Directed by Kabir Khan, film ’83 has emerged as one of the biggest disaster films of Bollywood and has caused huge losses to the makers. The film garnered a business of only 47 crores at the weekend which included 12.64 crores on Friday, 16.95 crores on Saturday, and 17.41 crores on Sunday. As per earlier expectations, it should have scored 50% higher each day.

Then on weekdays, the film reported a big drop in footfalls and did a business of 7.29 crores on Monday. With a further decline on Tuesday, it scored 6.70 crores and registered a 5-day total of 60.99 crores net at the domestic box office including all the versions. Due to the rise in COVID cases, many states have imposed restrictions on night shows. Considering which, the Jersey release has been postponed, so ’83 will not face any competition in week-2.

In parallel, the Hollywood offering Spider-Man: No Way Home is heading towards 200-crore at the Indian box office. After a fantastic 8-day extended first week with 148.07 crores, the film bagged 26.85 crores at the second weekend and 4.45 crores on the 2nd Monday. With a slight drop, it managed to score 3.65 crores on the 2nd Tuesday and increased its 13-day total to 183.02 crores net.

Whereas the Hindi version of Allu Arjun and Rashmika Mandanna starrer Telugu film Pushpa: The Rise, is performing pretty well in the Hindi circuit. Sukumar’s directorial collected 26.95 crores in the first week and 10.35 crores at the second weekend. On the 2nd Monday, with a normal drop, Pushpa Hindi managed to score 2.75 crores. Then on the 2nd Tuesday, it raked 2.50 crores and raised its 12-day total to 42.55 crores.