Based on the 1983 Cricket World Cup, the film ’83 is showing a downtrend at the box office. Unfortunately, Ranveer Singh starrer failed to impress the audience and is facing rejection across the country. Whereas the last week released films Spider-Man: No Way Home and Pushpa: The Rise are running steadily at multiplexes and mass centres respectively. 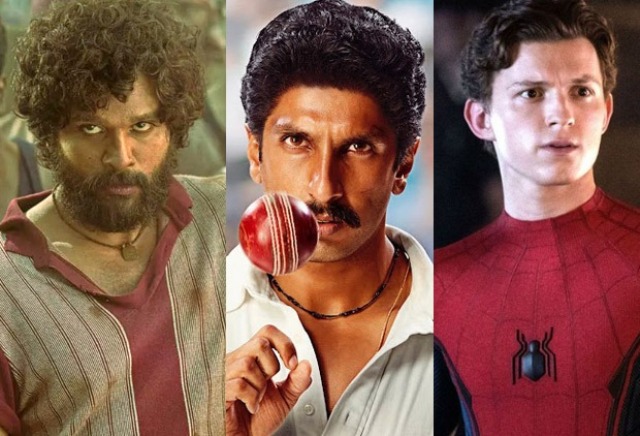 The mega-budget film ’83, directed by Kabir Khan, took a below-average start at the box office and did a business of 47 crores at the opening weekend which included 12.64 crores on Friday, 16.95 crores on Saturday, and 17.41 crores on Sunday from all versions. Seeing the poor response, many centres have replaced half of its shows with Spider-Man: No Way Home and Pushpa: The Rise.

On weekdays, Reliance Entertainment’s presentation recorded a major drop in footfalls. As a result, it bagged an amount of 7.29 crores on Monday and 6.70 crores on Tuesday. With a further decline, the film garnered a business of 5.67 crores and registered a 6-day total of 66.66 crores net at the domestic box office including all the versions.

In parallel, the latest offering in the Marvel Cinematic Universe, Spider-Man: No Way Home is heading towards 200-crore in India. On a fantastic note, it did a business of 148.07 crores in the 8-day extended first week and 26.85 crores at the second weekend. On weekdays, after a normal drop, it managed to collect 4.45 crores on the 2nd Monday and 3.65 crores on the 2nd Tuesday.

On the next day i.e. 2nd Wednesday, Tom Holland starrer minted an amount of 3.40 crores and increased its 14-day total collection to 186.42 crores net at the Indian box office from all the versions. Whereas the PAN-India film Pushpa: The Rise is also running steadily in the Hindi circuit as well as the rest of India.

From the Hindi version, Allu Arjun and Rashmika Mandanna starrer film raked a business of 26.95 crores in the first week and 10.35 crores at the second weekend. Then on weekdays, it collected an amount of 2.75 crores on the 2nd Monday and 2.50 crores on the 2nd Tuesday. With a minimal decline on the 2nd Wednesday, Pushpa Hindi managed to score 2.40 crores and registered a 13-day total of 44.95 crores.