On a very low note than expected, the last Friday released mega-budget Hindi film ’83 has ended a week at over 71.50 crores in India with all the versions and formats. Unfortunately, this period sports drama film failed to impress the viewers and has received rejection across the country. 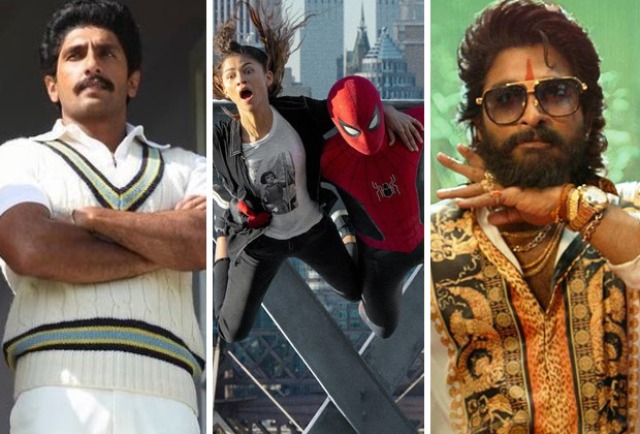 Directed by Kabir Khan, the film ’83 was opened on a below-average note at the box office despite positive reviews from most of the critics and garnered a business of 47 crores at the opening weekend which included 12.64 crores on Friday, 16.95 crores on Saturday, and 17.41 crores on Sunday from 3741 screens across India.

On weekdays, with theatres closed in Delhi and reduced shows nationwide, Ranveer Singh starrer bagged 7.29 crores on Monday, 6.70 crores on Tuesday, and 5.67 crores on Wednesday. Then on Thursday, with a further drop, the film ’83 minted an amount of 5.21 crores and registered a total of 71.87 crores net within 7 days at the domestic box office.

On the other hand, Marvel Studios’ Spider-Man: No Way Home has emerged as the 3rd highest-grossing Hollywood film in India by surpassing the lifetime total of The Jungle Book (188 crores net). Showing a fantastic performance since the release, the film did a business of 148.07 crores in the 8-day extended first week and 26.85 crores at the second weekend.

On weekdays as well, Tom Holland starrer maintained a good pace and managed to rake 4.45 crores on the 2nd Monday, 3.65 crores on the 2nd Tuesday, and 3.40 crores on the 2nd Wednesday. With a slight decline, Spider-Man: No Way Home added 3.25 crores more on the 3rd Thursday and increased its 15-day total to 189.67 crores net (241.77 crores gross) from India.

In parallel, the Hindi version of Allu Arjun and Rashmika Mandanna starrer much-buzzed Telugu film Pushpa: The Rise is running pretty well in the Hindi circuit despite competition. It did a business of 26.95 crores in the first week and 10.35 crores in the second weekend with a major contribution from the mass centres.