After a disappointing first week, the period sports drama film ’83 has shown a decent performance in the second weekend and has collected over 90 crores at the domestic box office. While the Hollywood offering Spider-Man: No Way Home and PAN-India release Pushpa: The Rise (Hindi) also did well at the third weekend. 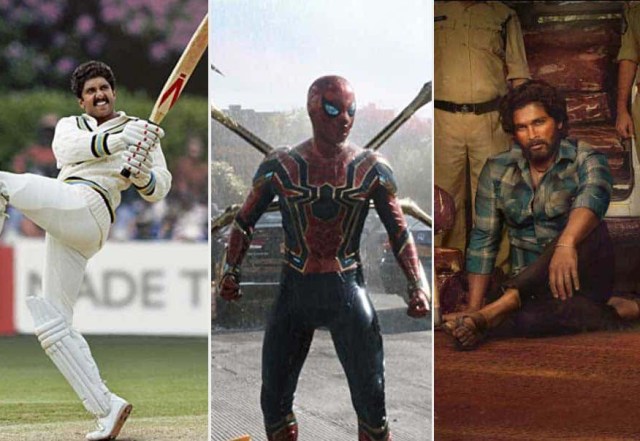 The mega-budget film ’83, directed by Kabir Khan, took a below-average start across the country despite positive reviews from critics. In the opening week, it had garnered a business of 71.87 crores which included 47 crores at the weekend and 24.87 crores on weekdays including all the versions and formats.

On the other hand, the latest film in the Marvel Cinematic Universe, Spider-Man: No Way Home has crossed the 200-crore mark at the box office in India. On a fantastic note, it did a business of 148.07 crores in the 8-day extended week 1 and 41.60 crores in the second week.

On the third weekend as well, Tom Holland starrer managed to hold well and minted 3 crores on the 3rd Friday. Over the weekend, it showed a solid uptrend and bagged 4.92 crores on Saturday and 4.75 crores on Sunday. After 18 days, Spider-Man: No Way Home has increased its total collection to 202.34 crores net in India.

In parallel, the Hindi version of PAN-India film Pushpa: The Rise is also running strongly in the Hindi circuit despite competition. Allu Arjun and Rashmika Mandanna starrer managed to score 26.95 crores in week-1 and 20.24 crores in week-2. Then on the third weekend, the film showed an impressive jump and raked 3.50 crores on the 3rd Friday.

Maintaining the pace, Pushpa Hindi added 6.10 crores more to its account on Saturday. With a further jump, it raked 6.25 crores on Sunday and registered a total of 63.04 crores within 17 days of release.