After a couple of weeks, the audience will have several options to watch in theatres. This Friday, there are two Bollywood films set to release at the box office- India’s Most Wanted and PM Narendra Modi. Apart from these, Disney’s musical fantasy Aladdin and superhero horror Brightburn are also hitting the screens in India. 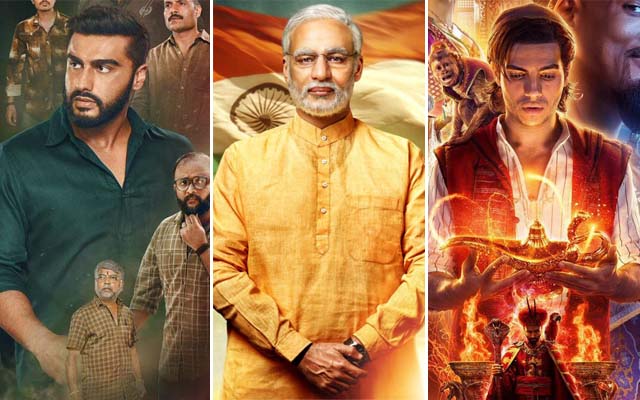 Directed by Raj Kumar Gupta who had given successful thriller Ajay Devgn starrer Raid last year, India’s Most Wanted is an action-thriller features Arjun Kapoor in the lead role. Fox Star Studios’ presentation is inspired by the arrest of IM terrorist Abdul Subhan Qureshi in January 2018.

India’s Most Wanted has created a good interest in the audience with its trailer, which makes it a major release of this week but still the performance will depend on word of mouth. Considering the decent buzz & Arjun Kapoor’s ordinary previous records, IMW is expected to open at a range of 2-3 crores.

On the other hand, the biopic of Prime Minister Narendra Modi titled PM Narendra Modi had good buzz among the audience initially but the unexpected delay in the release has melted down its hype to some extent. Helmed by the director of critically acclaimed Sarbjit Omung Kumar, this biographical drama stars Vivek Oberoi in the titular role.

PM Narendra Modi now has an average buzz due to several postponements but as Modi has got a historical win in Lok Sabha Elections 2019, his supporters can help the film to perform well at the box office. So far, it seems to open in a range of 1.50-2.50 crores at the domestic box office.

In parallel, the live-action adaptation of Disney’s 1992 animated film with the same title, Aladdin is releasing with a decent hype and expected to open at around 2-2.50 crore. While Brightburn is releasing only in English, so it doesn’t seem to take the opening of more than 1 crore.