After passing the opening weekend at a good note, Kangana Ranaut and Rajkummar Rao starrer Judgementall Hai Kya has entered on weekdays with a steady pace. While the adjacent offering Diljit Dosanjh and Kriti Sanon’s Arjun Patiala has crashed down on Monday after a dull weekend. 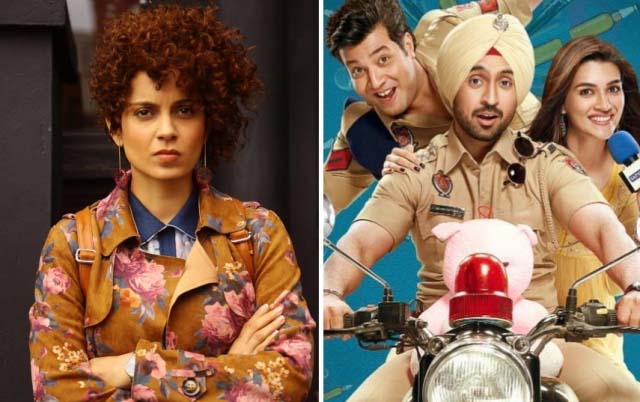 Produced by Balaji Motion Pictures & Karma Media And Entertainment, the Hindi dark comedy has entertained many in theatres and gathered a positive word of mouth. The film was started at a decent note but eventually registered a good weekend with 22.04 crores that included 5.40 crores on Friday, 8.02 crores on Saturday & 8.62 crores on Sunday.

On Monday, Judgementall Hai Kya has recorded a 51.85% drop vis-a-vis Friday and minted the amount of 2.60 crores. With this, its 4 days total collection has become 24.64 crores nett at the domestic box office. As per the current trend, it is expected to rake around 32 crores by the end of this week.

In parallel, Maddock Films & T-Series Films’ production Arjun Patiala has got failed to convince critics as well as the audience and struggling at the box office. In the weekend, it had raked the business of only 5.40 crores with 1.50 crore on Friday, 1.80 crores on Saturday & 2.10 crores on Sunday.

Directed by Rohit Jugraj, the comedy-drama has now entered on weekdays and recorded a significant drop in footfalls. On Monday, it has witnessed a decline of 60% than Friday and bagged the amount of 0.60 crore. After 4 days, the total collection of the film has become 6 crores nett.