The latest offering of Kangana Ranaut and Rajkummar Rao, Judgementall Hai Kya is heading steadily on weekdays after a good opening weekend. While the adjacent release, Diljit Dosanjh and Kriti Sanon starrer Arjun Patiala is struggling at the box office from the very first day. 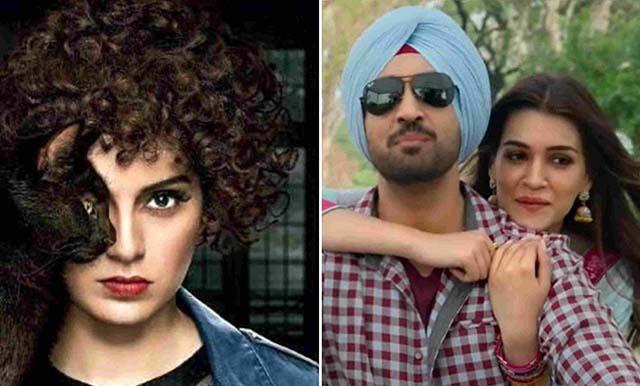 Produced by Balaji Motion Pictures & Karma Media And Entertainment, the Hindi dark comedy has got succeed to convince critics as well as the audience and gathered a positive word of mouth. In the weekend, it did 22.04 crores with 5.40 crores on Friday, 8.02 crores on Saturday & 8.62 crores on Sunday.

Now Judgementall Hai Kya is running on weekdays and still has a steady pace after a significant drop in footfalls. On Monday, it had raked the business of 2.60 crores, while bagged 2.62 crores on Tuesday. On the next day i.e. Wednesday, the film managed to collect 2.26 crores and raised its 6 days total collection to 29.52 crores nett at the domestic box office.

On the other hand, Maddock Films & T-Series Films’ production Arjun Patiala has got crashed within the weekend and struggling to attract enough audience towards theatres due to mostly negative reviews. In the weekend, it had raked the business of 5.40 crores the included 1.50 crores on Friday, 1.80 crores on Saturday & 2.10 crores on Sunday.

Directed by Rohit Jugraj, the Hindi comedy-drama is now running on weekdays at a very low note. On Monday, after a significant drop, it did the business of 0.60 crore. With the further decline, it managed to collect 0.50 crore on Tuesday & 0.35 crore on Wednesday. After 6 days, its total domestic collection has become 6.85 crores nett.