After passing the fourth weekend at a steady note, superstar Akshay Kumar and Parineeti Chopra starrer Kesari is heading steadily on weekdays as well despite having a bunch of new releases along with last week’s Romeo Akbar Walter & the ongoing IPL 2019. 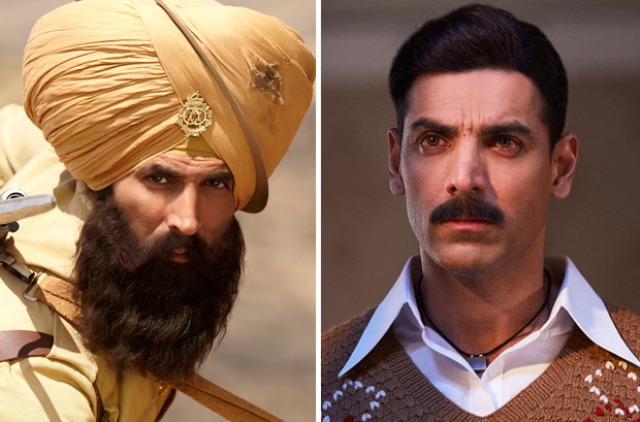 With positive reactions, Anurag Singh’s directorial period war drama gathered a solid word of mouth and did the business of 147.21 crores in the last 3 weeks which included 105.86 crores in the 8-days extended first week, 29.66 crores in the second & 11.69 crores in the third.

In the fourth weekend, it managed to collect 3.70 crores which included 0.70 crore on Friday, 1.30 crore on Saturday & 1.70 crores on Sunday. On 4th Monday, it remained almost steady and minted 0.55 crore. While on 4th Tuesday, Kesari bagged 0.50 crore and raised its 27 days total domestic collection to 151.96 crores nett.

On the other hand, after an underperformed opening week, John Abraham & Mouni Roy starrer Romeo Akbar Walter is running decently in its second week. In the first week, it did the business of 32.05 crores with 22.70 crores in the weekend and 9.35 crores on weekdays.

Then in the second weekend, Robbie Grewal’s directorial spy thriller drama garnered 6.30 crores which included 1.25 crore on Friday, 2.25 crores on Saturday & 2.80 crores on Sunday. On 2nd Monday, it managed to collect 0.80 crore after a usual drop. With the further decline, RAW minted 0.70 crore on 2nd Tuesday & raised its 12 days total domestic collection to 39.85 crores nett.