The PAN-India sensation from the Kannada Cinema, KGF 2 is reigning at the box office across the country as well as overseas. The period action film is doing phenomenal with its dubbed Hindi version. It has already become the third highest-grossing Hindi film of all time by surpassing Sanju (342.86 crores) and now heading to beat Dangal‘s record of 387.38 crores. 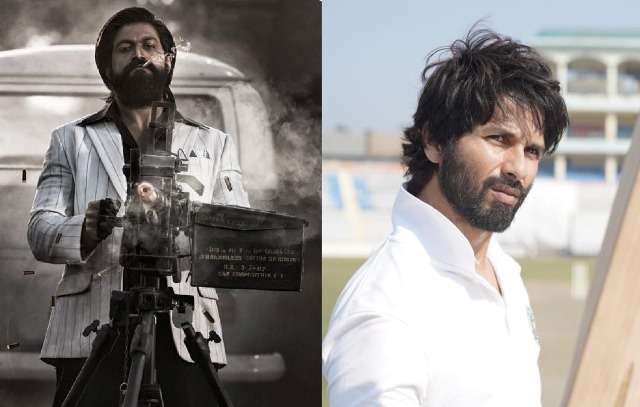 A couple of weeks back released KGF 2 started the journey on an earth-shattering note in the Hindi belt and did a business of 269.60 crores in an 8-day extended first week which included 193.99 crores in a 4-day opening weekend and 75.61 crores on weekdays. At the second weekend, the film raked 52.49 crores with 11.56 crores on Friday, 18.25 crores on Saturday, and 22.68 crores on Saturday.

Then on weekdays, on a steady note, Yash starrer KGF 2 (Hindi) managed to collect 8.28 crores on Monday, 7.48 crores on Tuesday, and 6.25 crores on Wednesday. With a further drop, it minted 5.68 crores on Thursday and registered a total of 348.81 crores nett at the domestic box office within 15 days of its release.

Whereas the sports-drama film Jersey, which was released last Friday, got failed to receive enough response at the box office due to KGF 2. Despite positive reviews, Shahid Kapoor starrer took an overall average start and did a business of 12.21 crores in the opening weekend with 2.93 crores on Friday, 4.34 crores on Saturday, and 4.94 crores on Sunday.

On weekdays, Jersey, directed by Gowtam Tinnanuri, witnessed a significant drop and minted an amount of 1.45 crores on Monday, 1.32 crore on Tuesday, and 1.20 crore on Wednesday. With a further decline, the film netted 1.02 crore and registered a 7-day total of 17.20 crores nett at the Indian box office.

Ajay Devgn’s Runway 34 and Tiger Shroff’s Heropanti 2 will also be in the race from the new week. It’s not a problem for KGF 2, but yes, Jersey will suffer.