The two much-awaited Bollywood films – Aamir Khan’s Laal Singh Chaddha and Akshay Kumar’s Raksha Bandhan are all set to hit the theatres on Thursday, 11 August 2022 amid great enthusiasm among the fans. However, both the films have registered lower than expected advance bookings across the country till Wednesday evening. 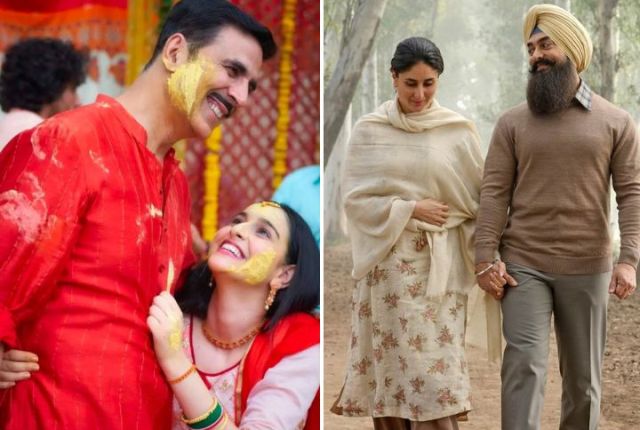 The biggest clash of Bollywood in the year 2022 so far is going to happen this festive season between two comedy-drama films targeting different audience segments. One is big-budget Laal Singh Chaddha, the official Hindi remake of 1994’s American film Forrest Gump and the other is mid-budget Raksha Bandhan, an emotional story that revolves around a brother and his four sisters.

Earlier, both Laal Singh Chaddha and Raksha Bandhan were expected to register double-digit openings at the domestic box office. But, as per the reports, both the films have received less than expected response at the ticket window before release. According to the stats, the title of the highest opening Bollywood film of this year is likely to remain with Kartik Aaryan’s Bhool Bhulaiyaa 2 (14.11 crores).

“Alarming situation for #Bollywood! Two big superstars are clashing on the holiday, but the audience is not showing much interest. Advance bookings for #AamirKhan’s #LaalSinghChaddha & #AkshayKumar’s #RakshaBandhan are lower than expected. Now it all depends on word of mouth.” – tweet by @shashankrayal

Going by the reports, Aamir Khan’s Laal Singh Chaddha is expected to open in a range of 12.50-14 crores nett, while Akshay Kumar’s Raksha Bandhan is expected to open at 9.50-11 crores nett. But there is no doubt that walk-in audiences and word of mouth can widen the gap or even turn the game upside down. The mass centres are contributing well for Raksha Bandhan, while the former seems like the first choice in metros.