The two Hindi offerings that have created good buzz by their trailers, Luka Chuppi & Sonchiriya are all set to hit theatres this Friday. Both films are based on opposite genres, so there will be no major competition between them. But the last week released Total Dhamaal will definitely hamper their performance. 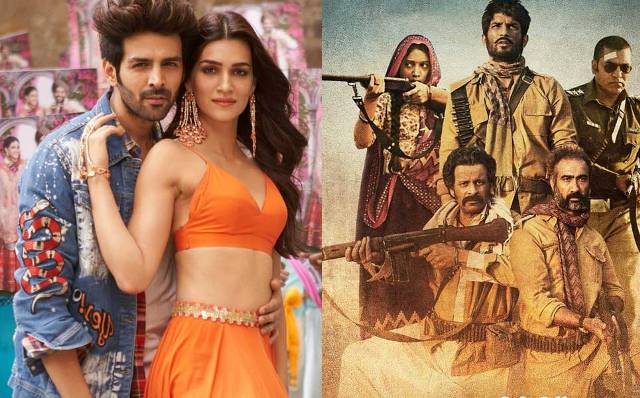 Luka Chuppi is produced by Dinesh Vijan under the banner Maddock Films, whose last film horror comedy Stree was a blockbuster at the box office. So as per the records & current scenario that being a comedy AA Films’ this presentation will have to compete directly with Total Dhamaal, it is expected to open in a range of 5-6 crores from 2100 screens.

Looking at the second one, Sonchiriya is an offbeat crime drama stars ensemble cast that includes Sushant Singh Rajput, Bhumi Pednekar, Manoj Bajpayee, Ranvir Shorey & Ashutosh Rana. Helmed by the director of Udta Punjab Abhishek Chaubey, the film is based on a rooted tale of dacoits in central India.

Besides a solid cast, Sonchiriya is backed by Ronnie Screwvala led production banner RSVP Movies which has recently delivered successful films like Kedarnath & Uri The Surgical Strike. But as Zee Studios’ this presentation attracts only a segment of the audience, so it is expected to open in a range of 2-2.5 crores from 720 screens.