After an excellent opening weekend, Dinesh Vijan’s latest production Luka Chuppi is maintaining a solid pace at the box office and heading smoothly on weekdays as well despite having last week released Total Dhamaal in parallel. The romantic comedy is getting a superb response from the single as well as multi-screen cinemas nationwide. 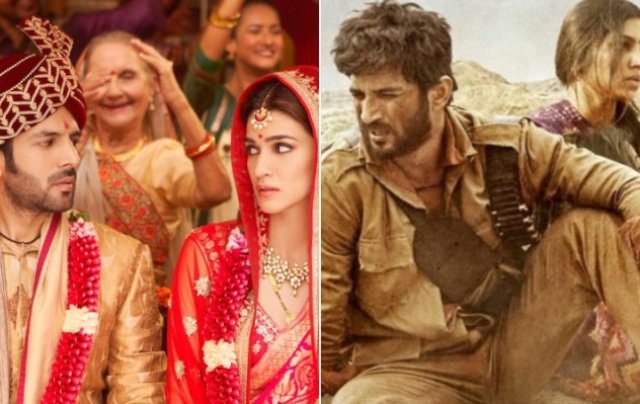 Directed by Laxman Utekar, the film stars Kartik Aaryan & Kriti Sanon in lead roles who are being appreciated by everyone for their crackling chemistry. For the fun-filled & interesting story-line, it has gathered positive feedback and did the business of 32.13 crores in the weekend which included 8.01 crores on Friday, 10.08 crores on Saturday & 14.04 crores on Sunday.

Luka Chuppi is now running on weekdays and still has a very good hold over the audience. On Monday, it managed to collect the amount of 7.90 crores due to Maha Shivratri holiday, while scored 5.04 crores on Tuesday. On the next day i.e. Wednesday, Kartik-Kriti starrer minted 4.60 crores and raised 6 days total domestic collection to 49.67 crores from 2100 screens.

In parallel, the other Hindi offering of this week, crime drama Sonchiriya is unfortunately not getting the desired response at the box office despite positive feedback. In the opening weekend, it did the business of only 4.60 crores with 1.20 crore on Friday, 1.50 crore on Saturday & 1.90 crores on Sunday.

On weekdays, expectedly, Sushant Singh Rajput, Bhumi Pednekar & Manoj Bajpayee starrer recorded a significant drop and bagged the amount of 1.10 crore on Monday & 0.70 crore on Tuesday. With a further decline, Sonchiriya raked 0.60 crore on Wednesday and raised its 6 days total collection to 7 crores at the domestic box office from 720 screens.